Upon arriving at the airport in Trondheim, located up in the beginning of the vast expanses of northern Norway, one wouldn’t think that a hub of culture would be located in amongst the fir trees and fresh water lakes that can be seen when coming in for a landing. But the home of the Trøndelag Theatre is exactly that. Boasting the oldest, still working stage in Northern Europe.

Upon arriving at the airport in Trondheim, located up in the beginning of the vast expanses of northern Norway, one wouldn’t think that a hub of culture would be located in amongst the fir trees and fresh water lakes that can be seen when coming in for a landing. But the home of the Trøndelag Theatre is exactly that. Boasting the oldest, still working stage in Northern Europe, the Trøndelag Theatre has been providing the residents in the area with entertainment since 1816. In its first few years of its existence, one can only imagine the work being done in the rafters and behind the scenes to make a show happen. Open flames, screaming actors, and a sea of “technicians” in the background, hauling rope pulleys and cranks to move set pieces and curtain. One has a vision of organized chaos. We had the opportunity to sit down with the head of the audio department, Siril Gaare, to find out about their past, present and future. 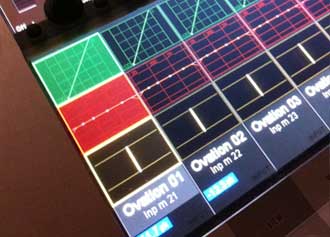 “We used to playback from Revox pr99 two track tape recorders, on the largest show we used up to 5 machines at the same time! And we really had to be aware of which machine to start at the different cue, if we did it wrong a totally different sound would start and affect the whole show. To stop each cue we had spliced in short pieces of transparent 1/4 inch tape, and we had written cue numbers and name on each piece so we were able to keep track on the location of the specific cue each tape roll… touch wood!”

But whatever the “analogue” past might have held, the audio team at the Trøndelag have not been scared about making sure they are on the cutting edge of technology. They are constantly looking out for equipment that will not only secure the operation of the theatre for years to come, but also to try and find ways to expand on their abilities to create more complex shows, with even more entertainment and “wow” value. Being one of the first users of the now legendary D.A.R. OMR8 workstation, the team at the theatre have shown a strong ability to sniff out technology that will allow them to become more creative as well as more reactive to the creativity of the production teams. 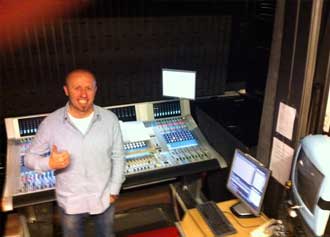 “We always tried to be in the front of the industry. We have done some mistakes, being this open minded. We keep thinking that we should be more conservative. But we just like new technology too much and if it is promising we like to be able to try it.”

Fast forward to 2009, and the audio team were looking around again for new technology. They had been using a piece of software at that point called TTA FX, but the company had announced that it would be stopping development on it, which forced them to start looking for their next step. Not being ones to make hasty decisions, the team spent most of that year testing and investigating every possibility. In the end though, the Ovation Media Server and Sequencer was chosen.

“The main decision for Ovation in the end came down to the Editing features in it. I love editing in Pyramix and the fact that you can push your edit to and from Ovation at the touch of a button means we can work as fast as we are used to. Also, the competition might be slightly cheaper software, but when you add the hardware needed to use it, the price turns out to be very similar”

The change over happened very quickly once they made their choice, and by May 2010, the first rehearsals with Ovation had started. The theatre never has a real point in the year when things are any less busy, and they had to allow themselves to trust the new systems while working at the same speed as they have always been.

“We run 6 nights every week, 2 to 3 shows at the same time. The software has to be stable and we have found we can trust Ovation every time. You can load up the show and you just know it is going to play every time.”

Coming from a history where multichannel playback was part of the way they worked, trusting a new system that was only able to cope with stereo information and relied on grouping to affect a “multi-channel-esque” playback was just not something they were willing to settle with.

“We had 8 tracks on the OMR-8’s and 16 tracks with the TTA FX software. We could make complex edits, crossfade different audio together and build timelines into each cue. We just couldn’t choose a software that could not do this easily.”

The way most of the scenes are setup is to have 16 tracks filled with different stereo and mono audio files, all working together to create complex atmospheres or to provide multichannel music in discreet channels directly to the Studer Vista5 desks that they use in each theatre. They then use a variety of interaction rules within each cue to be able to have a simple master list sending multiple commands to other lists and firing information into the theatre. Using the Pyramix Editor for the multichannel cues allows them the opportunity to really build unique sounds and “create” the sounds that the director and producers need. The fact that Pyramix delivers the cue to Ovation in a completely un-rendered edit means that when changes need to be made it can be done at the touch of a button without having to wait for lengthy mixdowns. Also, since the applications are completely integrated, they can even “edit in place”, listening to the Pyramix timeline through the same slot outputs that Ovation would play the cue from!

Now they are up and running with the Version 3.0, they had some clear views as to what they were going to get to work with as soon as they could

“We are really feeling that the Cue Gain matrix is finally going to allow us to send sounds to speakers in any part of the theatre so much more easily. We love that you can set the matrix size and control it so easily on a cue-by-cue basis. The new editing stuff in the Active Cue Window is great as well, and we have already thought of a couple of productions in rehearsal right now where the Cue Markers are going to come in very handy.”

Well, it is always nice to see someone excited about the future!

If you want to learn more about the Trøndelag Theatre in Trondheim, Norway, check out the website: www.trondelag-teater.no/

And to see all the amazing reasons for getting Ovation for your theatre, check out the Ovation section