Jeremy’s latest addition to the remote kit and home studio is the Anubis and this has been something of a revelation. His first impression of Anubis was “seems like a neat little box” but it proved quickly to be much more than that.

Recording orchestras with Merging equipment is not that unusual, but what makes Jeremy Tusz stand out is his interesting and international background before relocating to the US Midwest to take charge of the Milwaukee Symphony Orchestra’s recording endeavors. Along the way, he was introduced to Pyramix, quickly became a devotee, and subsequently developed an equal enthusiasm for the various Merging I/O solutions that have arrived during the last eight years.

Jeremy comes from a musical family but decided early on that performing was not what excited him. After participating in a youth orchestra recording at age 14, he wondered, “how come the final recording sounds so much better than it sounded at the back of the violin section?” This experience sparked an interest in music production, and after completing a BMus degree in viola performance, he was accepted into the renowned MMus Sound Recording program at McGill University in Montreal. While the McGill faculty is a big Merging customer, Jeremy did not dive deep into Pyramix until he experienced it in a classical music production environment at the Banff Centre for Arts and Creativity in Alberta, Canada, and later at Tanglewood, summer home of the Boston Symphony Orchestra.

Curious to see how the Europeans were doing things, Tusz ventured to the Netherlands for an internship with Polyhymnia in Baarn. Another Merging stronghold, the Polyhymnia team demonstrated how the Pyramix workflow worked for them for everything from DSD tape transfers to large scale orchestral productions. Moving across the border to Belgium for a spell at the renowned Galaxy Studios, he encountered Darcy Proper who showed him her Pyramix mastering workflow.

It was time to move back to Canada and Montreal. Working freelance, Jeremy’s knowledge of Pyramix became a great asset. He soon found himself busy editing projects for local classical producers, engineering sessions, and producing an increasing number of albums. It soon became clear that the next logical step was to build a capable remote recording kit. Soon after the Horus was released 2012, Jeremy had the opportunity to test it out on a session, and he liked what he heard. That led him to purchase a Horus fitted with 32 input and 8 output channels, and two laptops running Pyramix Native. However, film score work needed to be recorded in Pro Tools with surround monitoring and even more input channels, so a Hapi with a PT64 card was added in order to connect to a Pro Tools HD Native rig. Then, when need arose to address DXD/DSD work, 16 channels of Premium AD and 8 of Premium DA were added to “mix n match” according to the session requirements.

The opportunity to join the Milwaukee Symphony Orchestra presented itself in 2015 and Jeremy ensured that the symphony was equipped with enough Merging gear for most eventualities, freeing up his personal equipment for freelance work. Now in 2020, construction of the MSO’s new hall, The Bradley Symphony Center, is well underway and includes more comprehensive facilities for recording not only the orchestra, but a small studio for interviews, podcasts and the like.

Jeremy’s latest addition to the remote kit and home studio is the Anubis and this has been something of a revelation. His first impression of Anubis was “seems like a neat little box” but it proved quickly to be much more than that. “I certainly didn’t think it would completely change the way I think about my remote setups. It has added new value to my Horus and Hapi! Now I think of every input and output as a source or a cue or a monitor. It has brought even more capabilities and efficiencies to remote sessions.” In addition to the expandability of the Merging family that has been demonstrated many times over the last six years, there are several other notable benefits that have become so apparent:

“Reliability. I always run a backup, but in the past 5 years I have never had to use it.”

“Robustness. My Horus has been shipped on pallets, travelled on roughly 30 flights as checked baggage (and we know how baggage handlers treat equipment), and has been dropped from high enough to bend the front panel of the Horus, but it still works!”

“Workflow. Everyone always talks about specs, and Merging gear certainly has great specs, but a great sounding recording isn’t made with specs alone. Being able to control and recall preamps from the software, peak log and great metering to check levels, amazing file management, means more time to spend positioning microphones, and less time that the musicians have to stand around waiting. In sessions, especially orchestral sessions, time is your greatest enemy.”

After working with the Anubis for a while, Jeremy amplifies his comments; “I have mostly been using it at my home studio for monitor control, but last week I used it on an orchestral session with a tenor soloist and it was incredibly versatile!”

“We had monitors and three headphone feeds in the control room, talkback to the orchestra, a footswitch controlled closed talkback to the conductor’s earpiece, headphones on stage for the tenor so that we could playback what he had just recorded. We had two Pyramix machines as sources and also live microphones (the main pair) as sources so that the producer could continue conversations with the conductor while I was cueing up a take for playback.”

“And then there are the little details that make all the difference. The ability to name all of your sources, monitors, headphones as something meaningful to the users who are often not engineers (e.g. our headphones were named Denise, Brian, Marc, David, and Jeremy). And a further convenience was being able to control all of these features from the laptop without bothering the producer who had control of the physical device. In the future I will be adding a tablet to the mix.”

“This is truly impressive. The Anubis, along with my Hapi, has taken the place of a Cranesong Avocet, SPL surround monitor control, Benchmark DAC-1, and DirectOut producer.com, and it is far more powerful and configurable than all of them combined. It’s also way smaller and I’ve been able to remove a road case from my kit which further reduces shipping and extra baggage costs.”

March 2020 saw the COVID-19 epidemic wreaking global havoc and live performances cancelled in concert halls and other public places. Jeremy was asked at the very last minute if it would be possible to livestream a concert without audience and this was done very simply. “All I did was plug a laptop into the switch, download the Mixlr app, and route everything in ANEMAN. With the Anubis I was able to switch between the outputs of my two recording machines, the send to the livestream machine, and the return stream. Once again, Anubis to the rescue!”

The prospect of an extended period of cancelled performances provides opportunities to be inventive and to come up with alternative projects. There is the current WFMT radio season which will likely need to be filled out with historic recordings, but the Milwaukee Symphony has also started a new weekly podcast hosted by its music director Ken-David Masur, and just released a virtual performance video of Elgar’s “Nimrod”. Life goes on. 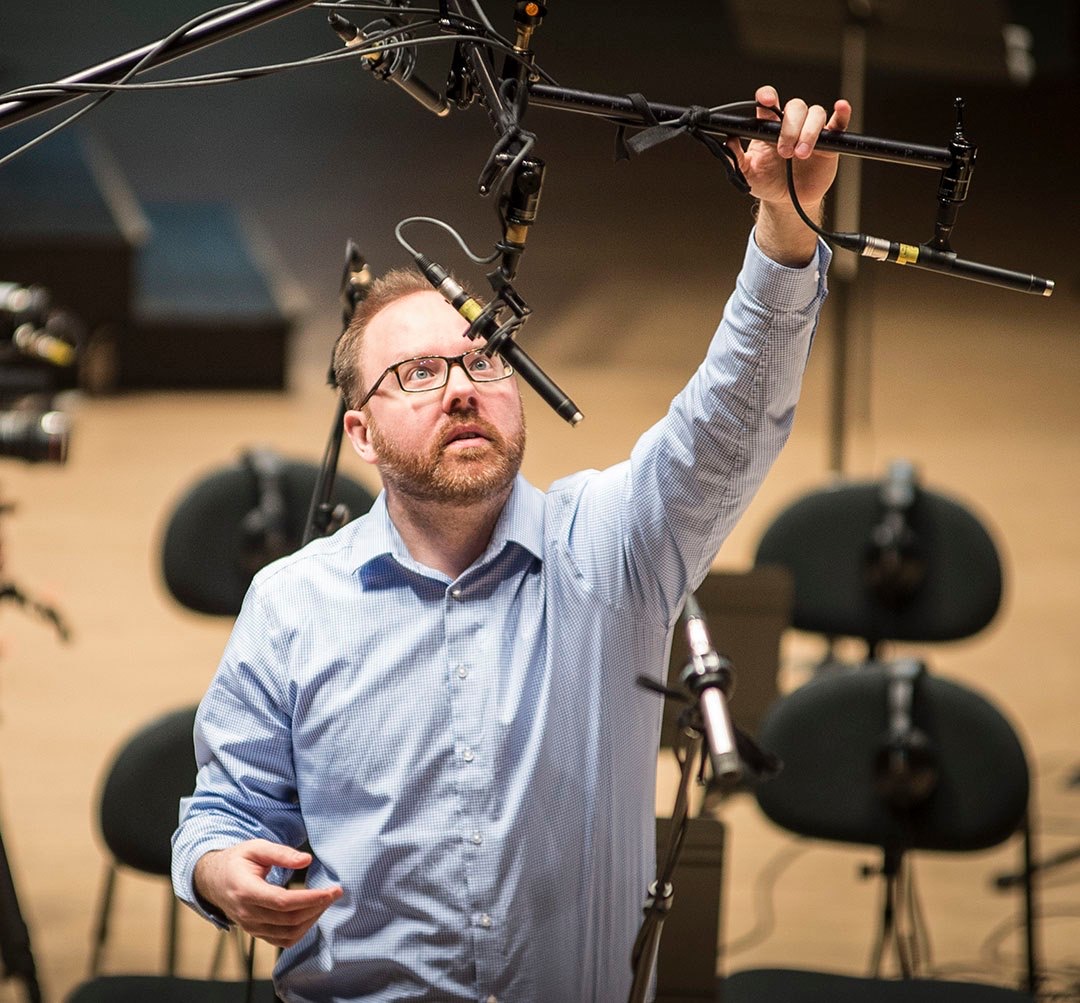 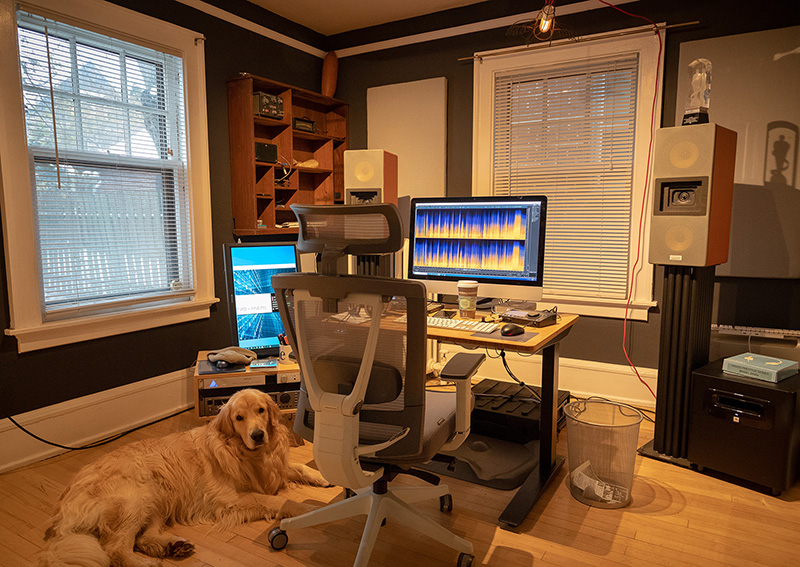 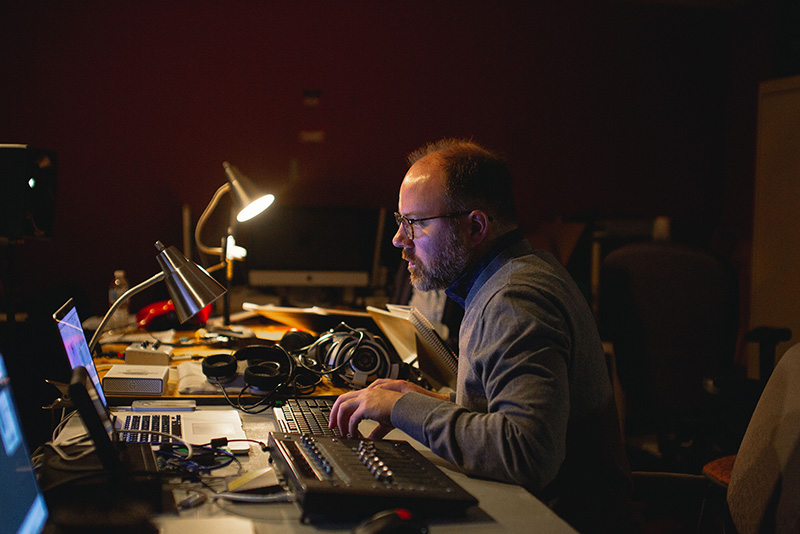 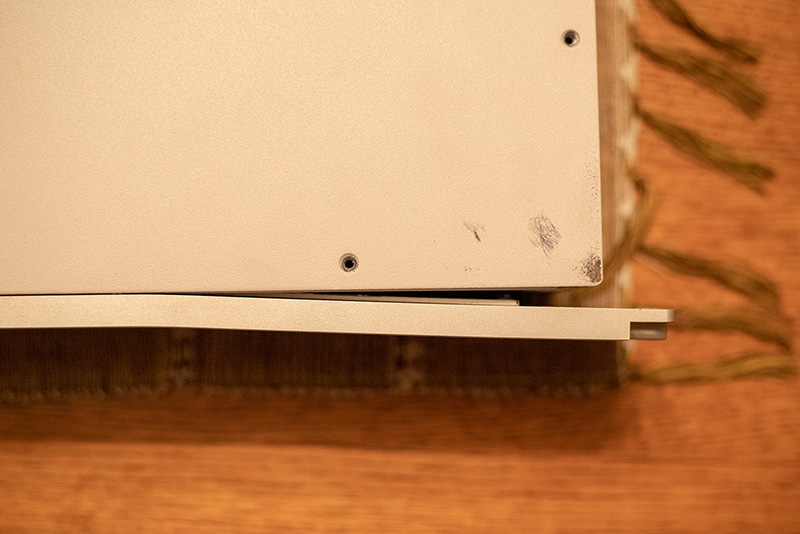 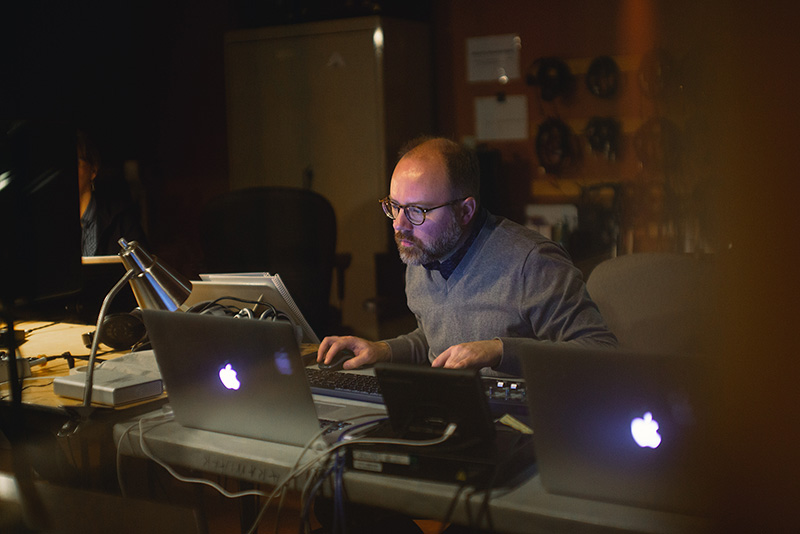 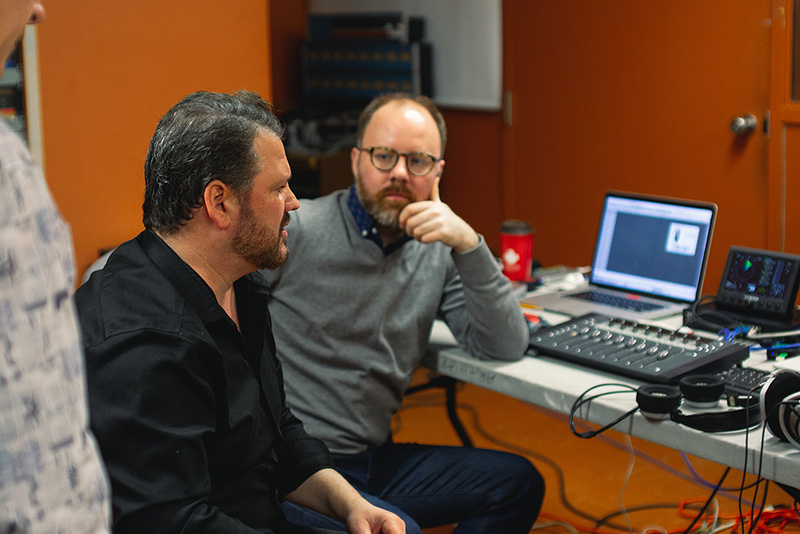 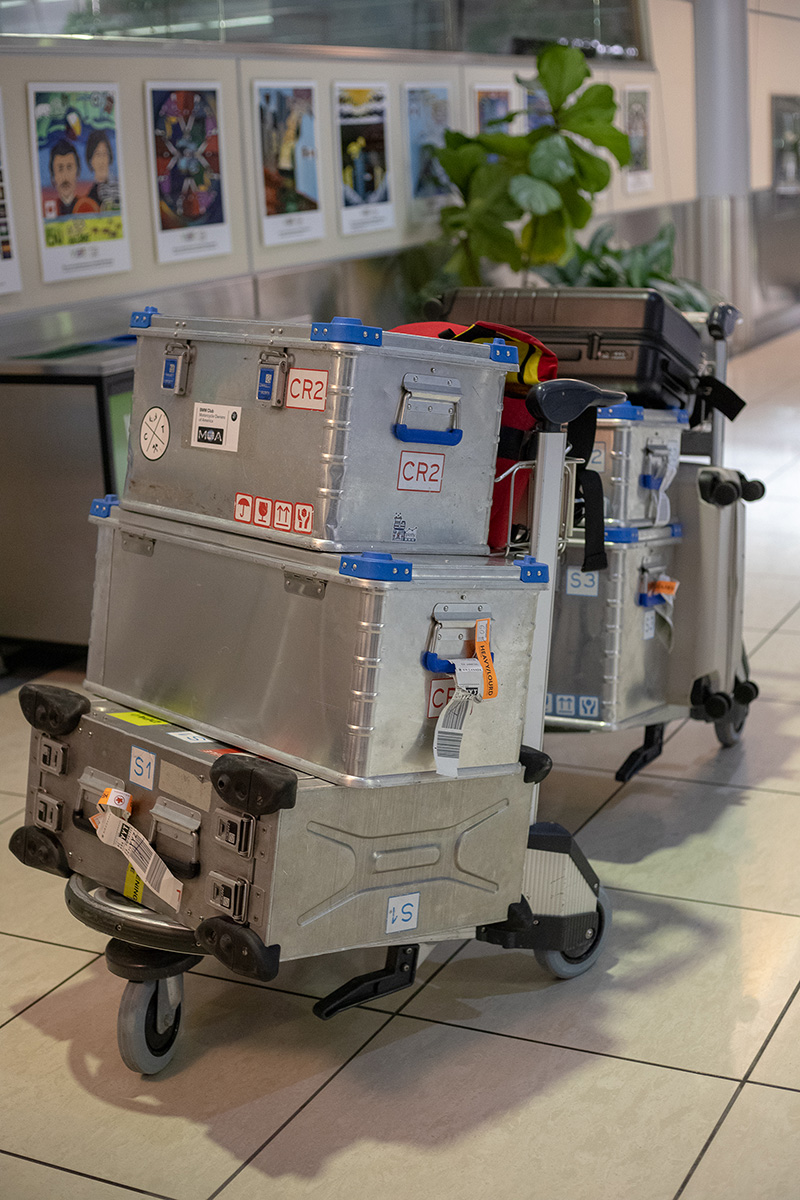 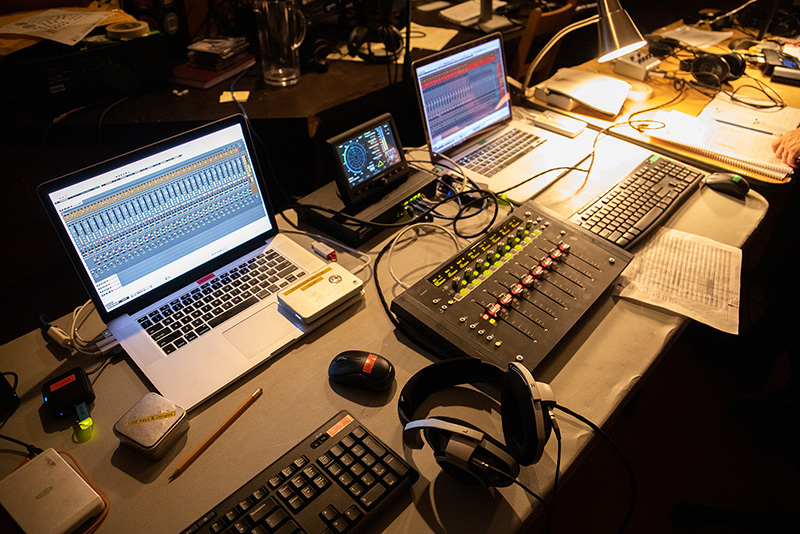 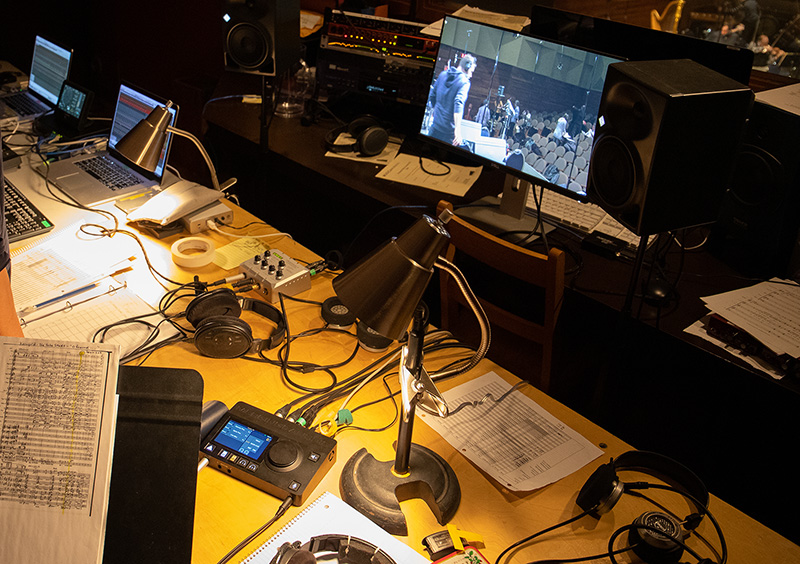 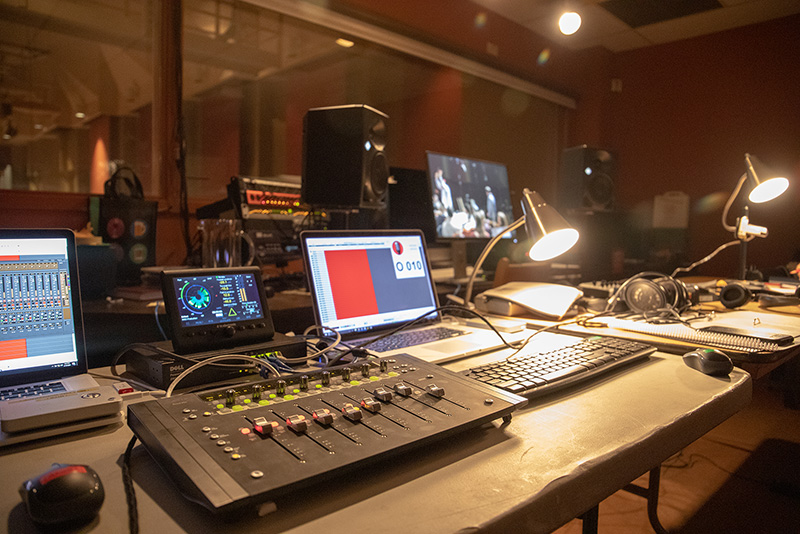 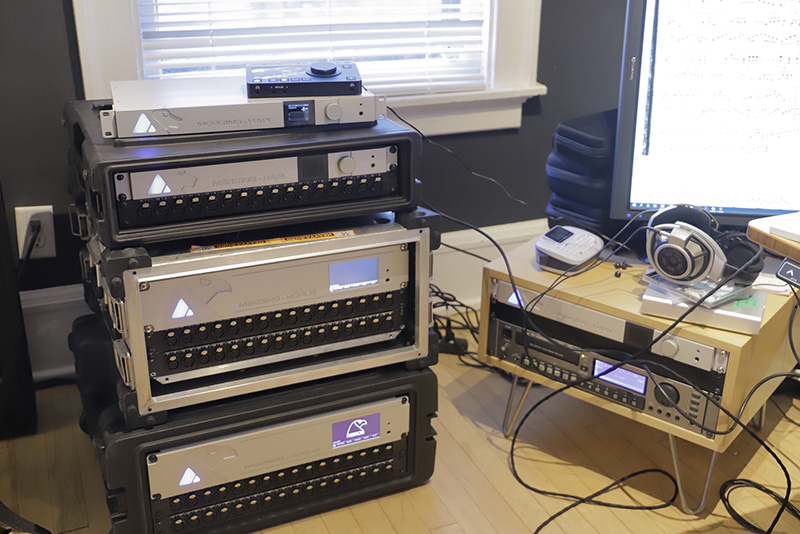 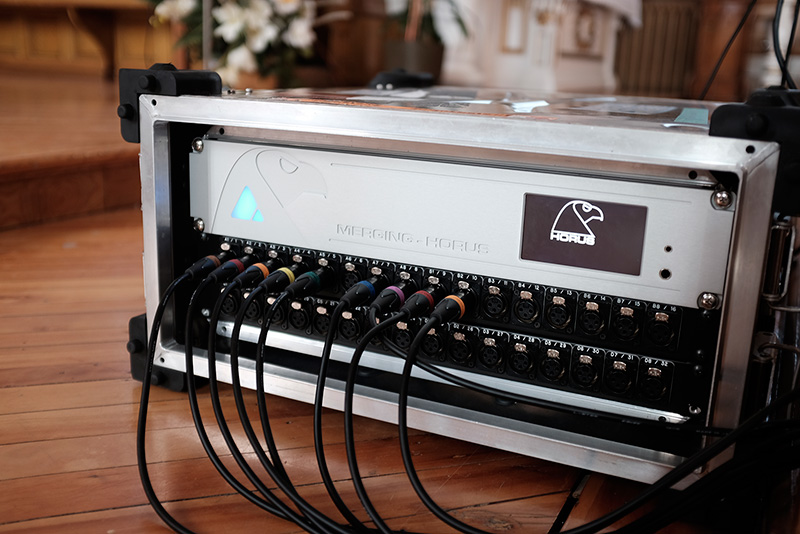