Andreas Klein is a recording engineer/producer and a concert pianist. A Pyramix user since 2006, Andreas has upgraded to Pyramix 8.1 and Horus to record concerts and sessions, sometimes featuring himself.

Andreas Klein is a recording engineer/producer and a concert pianist. A Pyramix user since 2006, Andreas Klein stays current with the advancing audio technology committing to 2 new Pyramix systems: one for on-location recordings (24 channel Horus converter with silent computer chassis) and an 8 channel DA Hapi converter for post-production in his studio.

Usually the recording team sits behind the glass or in another room and the musicians are in the studio but Andreas Klein could be in either place. His company, Ultimo Productions has been in operation since 1987 and his mission is simple, yet demanding: "provide the finest technology combined with impeccable service at realistic fees to classical musicians nationwide." The finest technology has included Pyramix since 2006 when he went right into DSD/DXD recording with the Sphinx II converter and Mykerinos. In the last year, Andreas has added a second system with Horus so he now has two fully working systems. A fine collection of Neumann and Schoeps microphones ensures that there is a pristine signal path to record soloists, full orchestras or choirs. One of the soloists could easily be himself capturing performances on the piano which are distributed by Eroica Classical.

Andreas believes that being a musician gives him extra insight into how it should sound or as he puts it: "I strongly believe that my educational background and my personal experience of "having been there" as pianist enables me to produce better recordings, because - as a musician - I have the ability to listen to that genre of music with a reference to numerous concert and session recordings. Because I have certain expectations for beautiful sound representation during the recording and for the consumer of those productions, the overriding requirement for choosing a DAW and all primary equipment is 'How does it sound?'"

He continues; "When I discovered Pyramix and the ability to record with DSD/DXD and heard the transparent, neutral (faithful) quality of sound reproduction and editing possibilities, the Pyramix system was a clear and sole choice. What also contributed to my decision into investing into this platform was the elegant visual elements and logical functionality. Not being an IT person, it was important to me to have a system with an intuitive operation; and with the ability to control most functions on the ISIS controller, I am able to relieve my pianistic hands from the constant mouse movements other systems (at the time) required."

Not content to just make the recordings, Andreas passionately believes in sharing his experiences with future generations and he recently presented a workshop at the Meadowmount School of Music in Adirondack which is located in beautiful countryside 300 miles North of New York City, on the borders of Vermont. The School is celebrating its 70th anniversary having been founded as a summer institute by the highly influential violin teacher, Ivan Galamian. The list of alumni is a literally staggering assembly of talent; Itzhak Perlman, Pinchas Zuckerman, Kyung Wha Chung, Yo Yo Ma to name but a few and then looking at the list of concertmasters and orchestra principals, you can really get a measure of the school's importance to the international music community.

Meadowmount celebrated its anniversary with a special debut performance of the Kenneth Frazelle Triple Concerto which was recorded live by Andreas Klein. This was performed by the school's string orchestra on August 4th 2013 at a Gala Concert. Soloists were the esteemed Meadowmount alumni James Ehnes, violin, and Robert deMaine, cello, along with Meadowmount director, Eric Larsen, piano with James Albritten conducting. This provided the ideal basis for an in-depth discussion with the students on the challenges and considerations of recoding classical music, how to listen critically, how to find suitable venues, what is and is not possible with editing, mixing and mastering and the options for delivery in the 21st century. Director, Eric Larsen commented: "Andreas Klein produced a rich, full-voiced, professional recording of our 70th Season commission: a Triple Concerto for Solo Violin, Cello and Piano with String Orchestra. A difficult task under the best of conditions; all the more so, working in the difficult acoustic of our Concert Hall. The group of students working with him for the week received a hands-on, up-close overview of what is involved in professional recording and production."

Andreas' interest for recordings and technology started as a teenager, when he acquired his first tape recorder, a Telefunken Magnetophon 85. It was a mono recorder with the complimentary AKG/ Telefunken D19. Soon after the arrival of stereo recordings for consumers, he purchased a UHER Royale tape recorder and "upgraded" to Sennheiser MD421 microphones. This analog equipment was the starting point for exploring various aspects of audio production. Upon completing his piano studies, he was able to collect condenser and tube microphones and acquire the professional high end technology for multitrack recording and editing.

Initially recording mainly concerts, he was eventually asked to provide full recording services for orchestras, choirs, chamber ensembles and soloists. He has held positions as Director of Audio Recording at the American Festival for the Arts, TX; the Peninsula Music Festival, WI; and the Brevard Music Festival, NC. Among the artists to perform in his productions were Joshua Bell, Midori, Lynn Harrell, and Andre Watts. He produced concert recordings for NPR affiliate radio stations and worked with PBS on a series of short piano videos, "Intermezzo with Andreas Klein", in which he performed and provided professional audio sound tracks. More recently, he was the audio consultant for the new Performing Arts Center at Adelphi University, Garden City, NY, selecting audio gear for the concert hall and providing guidance for proper installation of audio equipment.

For more about Andreas Klein and Ultimo Productions check out these websites: 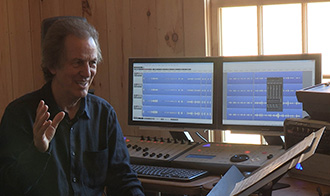 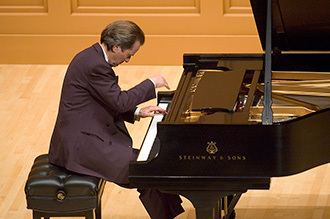 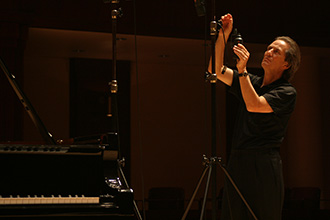 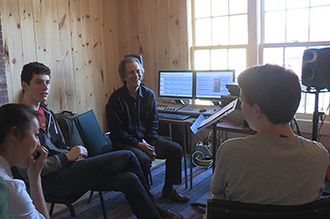