The lack of support for classical recording from major record labels is nothing new but more than ever, recordings are being made by the orchestras or the venues themselves. In addition, some enterprising independents; some old and some new; have made it their mission to record new and innovative music employing ground-breaking techniques. 2L is certainly one of those companies and Morten Lindberg has not been shy in employing a very different approach to any other balance engineer and producer. Recording in Digital eXtreme Definition (DXD) on Pyramix has been an essential ingredient to achieving outstanding sonic quality and Lindberg Lyd (2L’s recording arm) has constantly been upgrading its systems as Merging has introduced new technology. Now fully equipped with Horus and switching to 64bit with Pyramix 9.1, 2L is taking full advantage of the additional performance and simplicity offered by RAVENNA networking.

The music captured by 2L features Norwegian composers and performers and an international repertoire reflected in the Nordic atmosphere. The surround sound recordings of Lindberg Lyd not only transform the entire listening experience, but also - more radically - these innovative recordings overturn some very basic concepts regarding how music is played and even composed. 2L emphasize surround sound with Pure Audio Blu-ray and Hi-Res file distribution, and have garnered no less than 17 American GRAMMY® nominations since 2006. Eleven of these were in the categories "Best Engineered Album" and "Best Surround Sound Album".

2L records in spacious acoustic venues: large concert halls, churches and cathedrals. This is actually where they can make the most intimate recordings. The qualities sought in large rooms are not necessarily a big reverb, but openness due to the absence of close reflecting walls. Making an ambient and beautiful recording is the way of least resistance. The philosophy is to search for the fine line between direct contact and openness - that’s the real challenge! A really good recording should be able to bodily move the listener. This core quality of audio production is made by choosing the right venue for the repertoire and by balancing the image in the placement of microphones and musicians relative to each other in that venue.

Morten explains his general approach to recording music in surround sound: “There is no method available today to reproduce the exact perception of attending a live performance. That leaves us with the art of illusion when it comes to recording music. As recording engineers and producers we need to do exactly the same as any good musician: interpret the music and the composer’s intentions and adapt to the media where we perform. Surround sound is a completely new conception of the musical experience. Recorded music is no longer a matter of a fixed one-dimensional setting, but rather a multi-dimensional enveloping situation. Stereo can be described as a flat canvas, while surround sound is a sculpture that you can literally move around and relate to spatially. Surrounded by music you can move about in the aural space and choose angles, vantage points and positions. The beauty of the recording art is that there is no fixed formula and no blueprint. It all comes out of the music. Every project starts out by digging into the score and talking with the composer (if contemporary) and the musicians. It is not our task as producers and engineers to try to re-create a concert situation with all its commercial limitations. On the contrary; we should make the ideal out of the recording medium and create the strongest illusion, the sonic experience that emotionally moves the listener to a better place. Our approach is that a good surround sound is not created in the mix. It is made in the recording with dedicated microphone techniques. The composers and musicians should perform to the extended multi-dimensional sonic sculpture, allowing more details and broader strokes. Then surround is just a matter of opening up the faders. When the music is created, performed and recorded for surround sound then stereo is our most time-consuming challenge; figuring out how to preserve the total impact and level of details from this sculpture into a flat canvas.”

The dedicated microphone techniques referred to are tailored to the format offered on disc. Pure Audio on Blu-ray allows for a choice of audio streams and there is no practical restriction on the size of the audio files since there is little or no picture data present. A typical 2L release offers an astounding array of options. The Blu-ray can offer 9.1 Auro 3D, 7.1 96/24, 5.1 192/24 and stereo 192/24. The Pure Audio format also allows the user to stream FLAC files at 96 kHz or MP3 from the disc using mShuttle. Hi-Res downloads are available from a number of specialists sites and many of the titles are also available on SACD with 5.1 DSD and stereo DSD tracks included. If the decision has been made to make the primary release format 5.1, then a 5.1 microphone array will be used. If it is Auro 3D, then a 9.1 array is arranged and the musicians are strategically placed around the microphones. This is extremely different to a multi-mic recording which laid down to multiple tracks and is then mixed to Auro or 5.1. “The 5.1 surround sound is our main commercial product. The expansion to 9.1 3D is our playground. Development of the Pure Audio Blu-ray screen-less navigation makes it possible to reach out to a large home entertainment audience with our music recordings.”

Regardless of the type of array, Morten Lindberg uses DPA microphones which do present a challenge because they operate with much higher voltages than the usual 48 volt phantom power. This usually requires some custom building because 2L never use the HMA units. “Way back in 1996, John LaGrue modified our Millennia Media pre-amps to accommodate the high-voltage DPA microphones directly. First we had the 4-pin 130V and later the 7-pin, adding 190V for the 4041-S. Last August we started looking into using the integrated mic-pre of the new Horus. Motivated by the chance of avoiding amplifying to line and then padding to chip, we approached the head of research at DPA. The company didn't want to officially develop this kind of product but they allowed us to engage their chief engineer in out-of-company time. We now have a 24 channel "black box" feeding 130V and 190V to the microphones and passing the direct microphone output to the Horus. This unit does not apply any gain. It only makes an impedance optimization using the highest quality components available. When we initiated this development I only expected a minuscule improvement. But I was wrong. The difference is substantial. The result is silky smooth and soft, yet crystal clear and brilliant. We have now made 6 projects in the past two months, ranging from female voices through classical chamber music to full symphony orchestra, and the DPA High-voltage microphones feeding directly to the Horus sound consistently astonishing.”

Prior to purchasing their Horus units (and now Hapi), Lindberg Lyd was a fan of Merging’s Sphynx-2 converters which were top quality units in their day, but Morten is clear on the Horus advantages. “The tight integration with Pyramix allows total recall within the projects, the ease of RAVENNA clock management, the simplicity of connecting via a single Cat6 cable plus being able to remotely control Horus would be enough but, above all, it is the sound quality of the converter. The combination of the microphones, the “black box” and the ultra high frequency response of the Horus finally allows the potential of DXD to be realised.”

Lindberg Lyd ventured forth from Norway recently to the iconic Watford Colosseum in the UK to record the Philharmonia Orchestra conducted by Vladimir Ashkenazy recording Flint Juventino Beppe's REMOTE GALAXY at Watford Colosseum. This project is the sequel to the Grammy nominated album FLUTE MYSTERY. Soloists are Emily Beynon (flute), Mark van de Wiel (clarinet) and Ralph Rousseau Meulenbroeks (viola da gamba). This is a prime candidate for another Grammy nomination in the New Year. As usual this was recorded by Lindberg Lyd A/S to be published by 2L on Pure Audio Blu-ray and as Hi-Res music files. Produced in 9.1 surround at 24/352.8 kHz. Some of the pictures reproduced here are of this session with additional pictures from the spectacular Nidaros Cathedral. Here the performers were the Nidarosdomens jentekor & TrondheimSolistene in the process of recording Kim André Arnesen's MAGNIFICAT. This impressive work features a female voice choir, strings, piano and church organ is also recorded in 9.1 Auro-3D to be released on Pure Audio Blu-ray by 2L in 2014.


For more about Morten Lindberg and full details of the extensive 2L catalogue check out these `links: 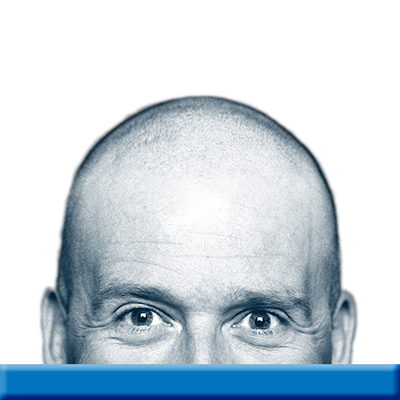 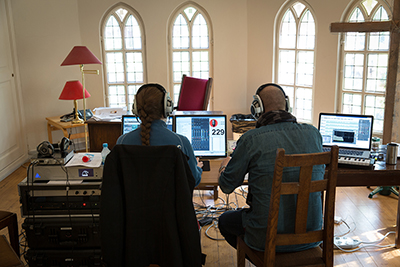 2L Session - Team from behind 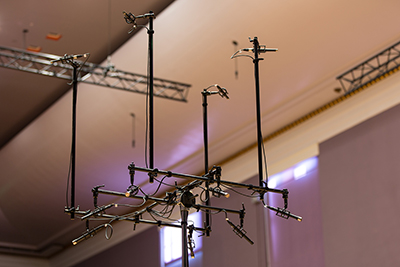 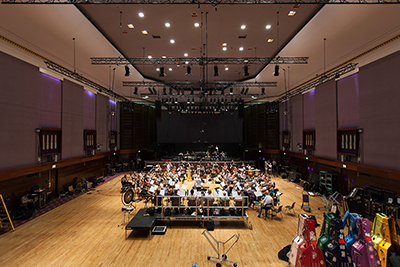 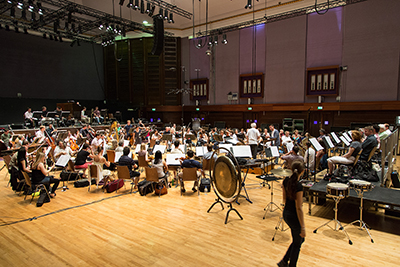 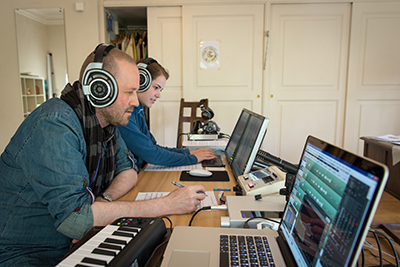 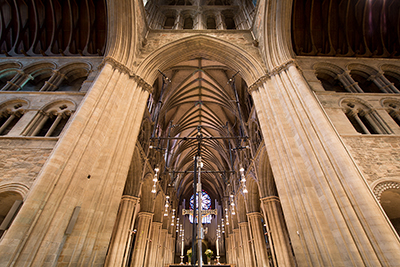 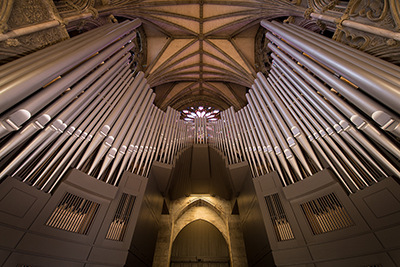 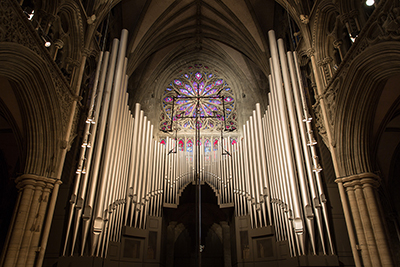 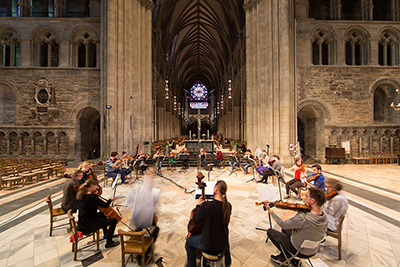 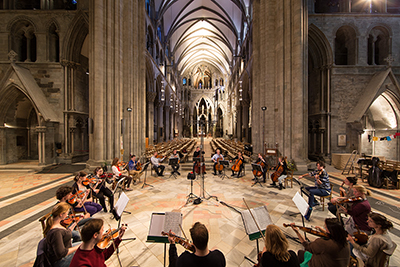 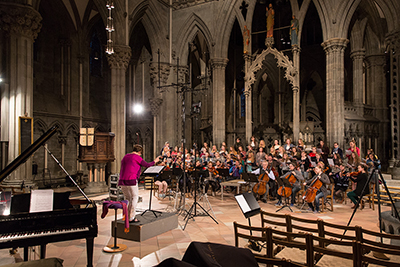 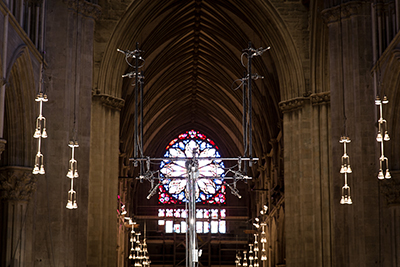 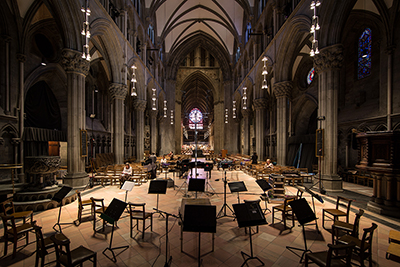 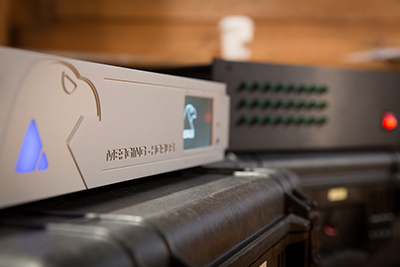 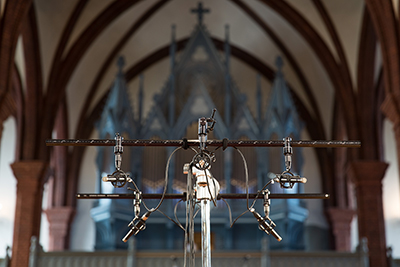 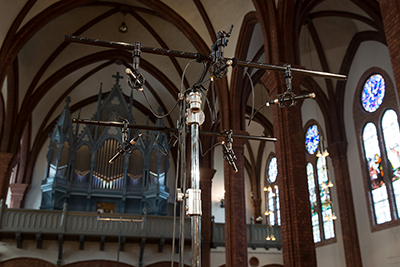