There is a tendency to think that developments in any technology come from USA, Europe or Asia so it is a real pleasure to discover that Dolby Atmos is equally alive and thriving in Brazil. Furthermore, you also discover that the person concerned studied for a master’s degree in object-based mixing for music as early as 2010, which easily predates any music production using objects. Mauricio Gargel was already actively involved in the audio world prior to moving to Nashville to attend the Middle Tennessee State University for three years of study and a year of placement. Returning to Brazil in 2014, Mauricio set up an analog mastering room that was configured for stereo and 5.1. In addition to music mastering, there was some documentary work that helped build up the reputation of the studio. The catalyst for a change was a certain pandemic that encouraged more working from home which could not be done with the existing analog gear, so this prompted Mauricio to look at working “in the box”. This would allow some final adjustments to be done in a different environment and free up some space in the studio. At this time, he discovered Merging’s Anubis and was intrigued because of the small size and having some experience of the other Merging converters in other studios, he thought it would likely sound good. Several questions were raised at the same time; would he regret selling all the analog gear; would Anubis do what it should; would it be stable; would the clients accept it? The initial learning curve was quite steep, also including getting a network set up at the same time as getting used to the new workflow. This was the opportunity to expand to an immersive system that would be capable of mastering Dolby Atmos for Music and other formats that might be requested. Adding a Merging Hapi allowed for the additional channels to feed the 14 speakers with Anubis controlling everything. Now the system is complete, it is just a matter of arriving at the studio, switching on and starting to work. All the other questions were answered as well; it did sound great, and it was stable, and the new look of the mastering room was very acceptable to the clients. 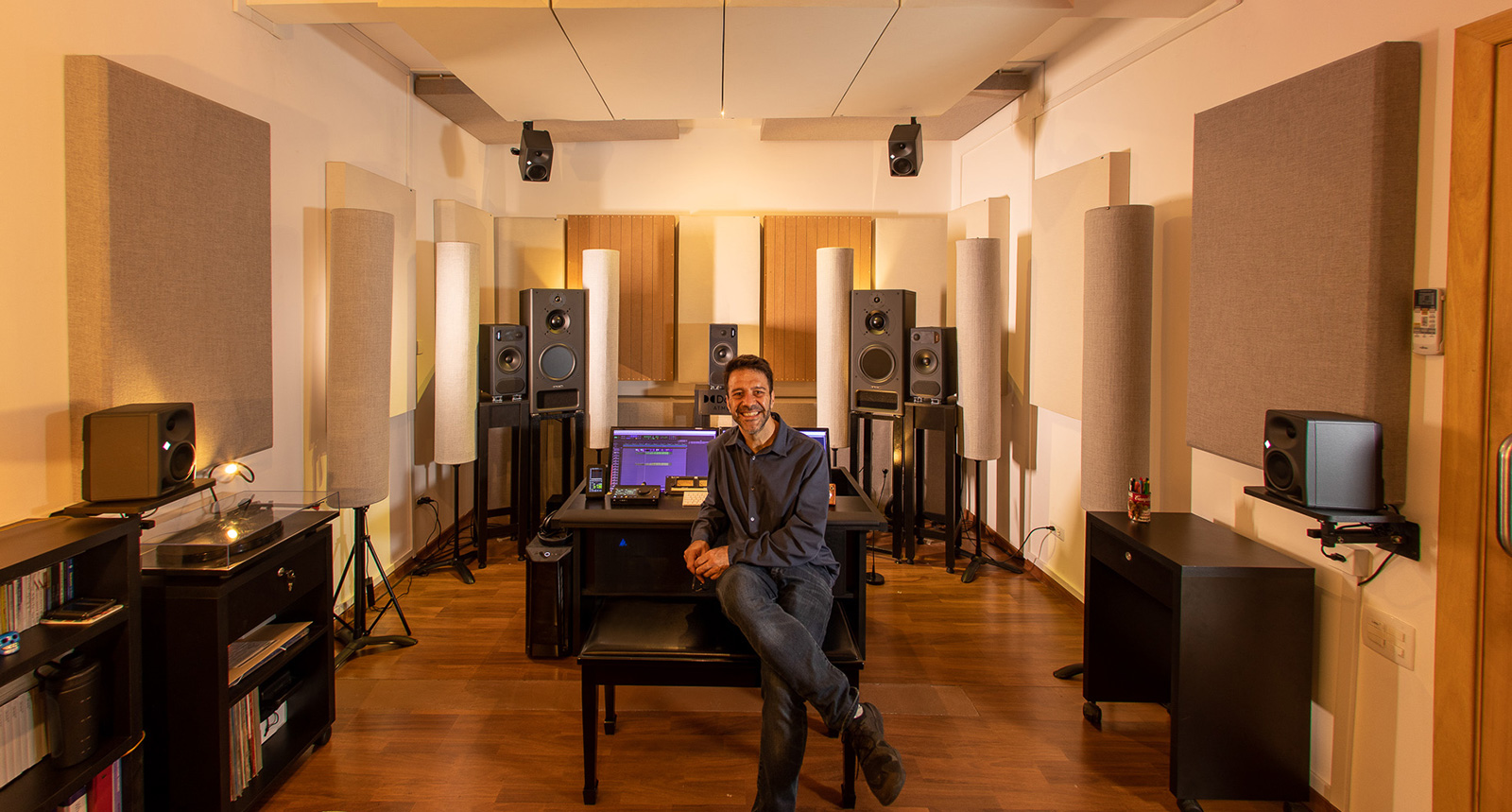 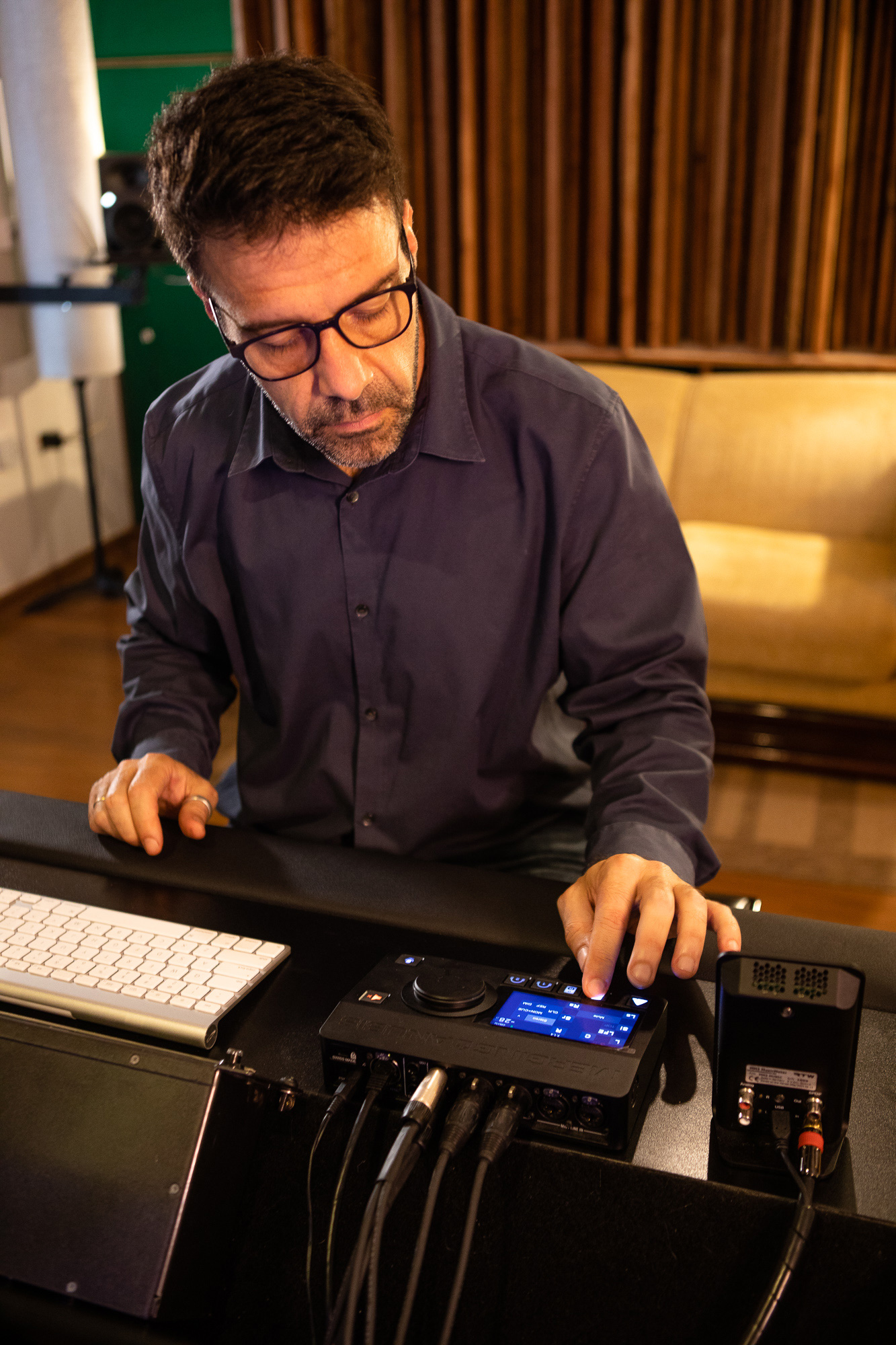 The majority of clients had traditionally been independent artists who definitely saw the opportunities of working in Dolby Atmos but found the budget a challenge. September 2021 saw a change with Universal Music and Apple contacting Mauricio to have projects formatted and mastered for Atmos. At the same time, video and film clients started to contact him for repurposing 5.1 projects. What became clear very quickly was that this was rather more than just mastering. Depending on what was delivered, stems, individual tracks or whatever, this required an element of mixing. Sounds needed to be placed in the bed at the right level and the objects need careful placement. This process was not straightforward and certainly opened up the creative possibilities for the independent music clients who were definitely keen to experiment but at the end of it, probably only could afford to do one track. At the same time as experimenting musically, having a reference listening space with the ability to easily do comparisons, allowed for testing of new software and plug-ins. The time spent doing this was not something that could be invoiced but working with niche artists was also more down to improvisation than science. There is no manual for how to mix and master in immersive but equally, once the final mastering was completed, how would it sound in binaural and without a degree of trial and error, there was no way to arrive at a satisfactory result.

“One of the issues here is there is no additional budget available for new productions and there is no premium at the consumer end. If you stream in stereo or Atmos, it generally costs the same whereas, for me it is a lot of extra work. Repurposing old material for a label is a project that can be invoiced but I think there needs to be a rethink on the charging structure for new productions. Perhaps if we become more efficient and they pay more, we can meet in the middle.” As Mauricio observes here, apart from this situation, there are other aspects to working in immersive, because there may be requirements for MPEG-H or Sony 360 that share similarities but are not so well defined and there is a difference in binaural encoding between Apple and others. This means many studios are hanging back and choosing to wait until the situation become more stable before investing in new gear, but this does not help in getting content into the market. 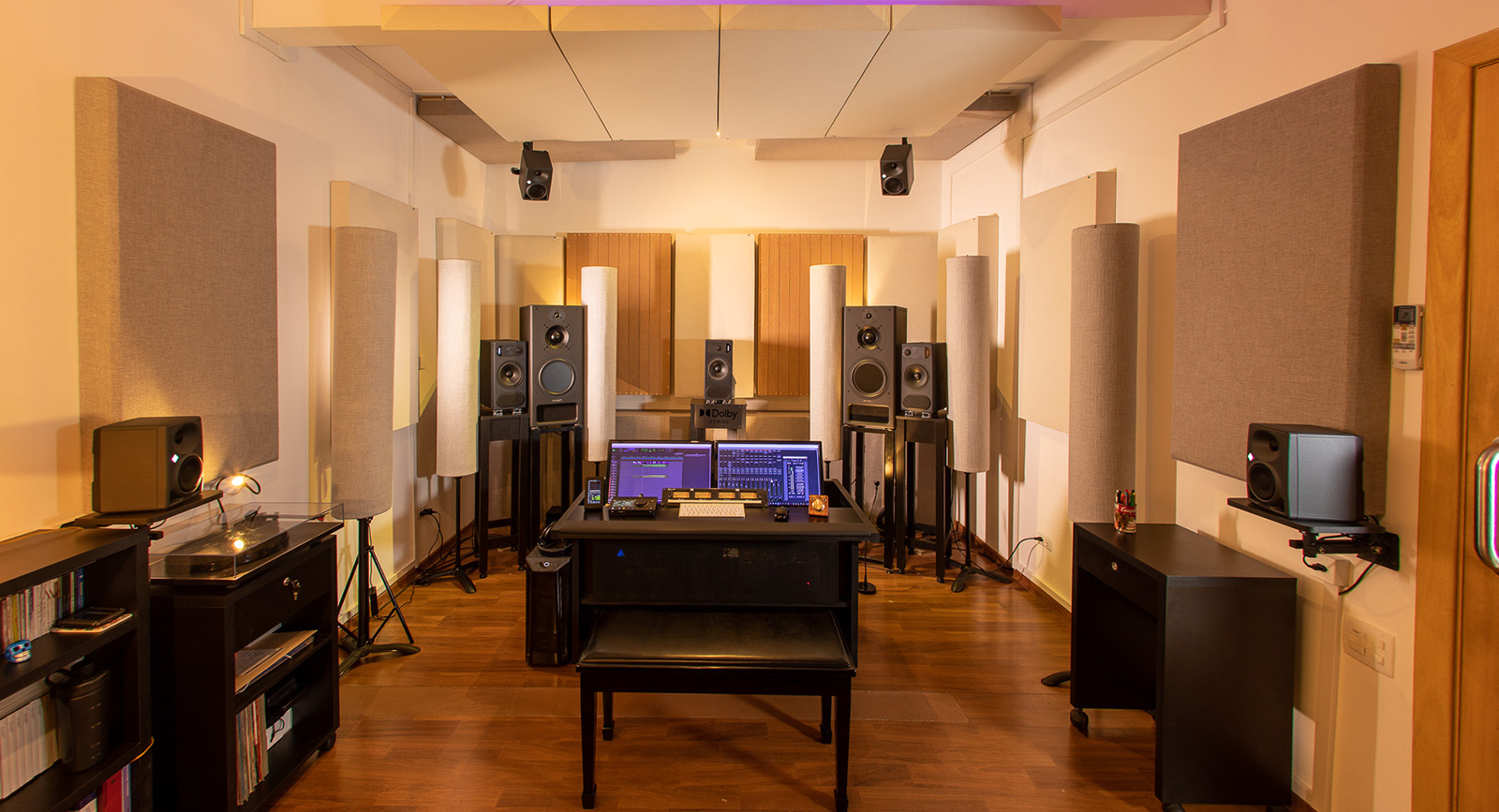 As a mastering facility, you must be able to handle material coming in on different DAW files. Pro Tools is ubiquitous for video and film projects, but Reaper is also very popular in Brazil. Some CD titles still come in on SADiE. Mauricio adds; “I am looking at Pyramix now because I like the idea of being able to do everything in one place. I can do mixing, sample rate conversion and export the final ADM with the metadata. I love Reaper’s flexibility with routing, but I can’t do the metadata. I don’t love Pro Tools even though I used to teach it, but it is so much used in Brazil, I can’t avoid it. I am learning Pyramix now as I only recently had time to investigate.”

Looking to the future, Mauricio thinks he may add two more speakers which are now from PMC for the main front and Neumann everywhere else. The only other possible investment could be in conversion tools if they become available. He does not want to depart from the listening room concept and become a full mixing studio, but if is demanded, he may consider it. The other difficulty he sees moving forward is quality control. On the client side, he sees confusion around the differences between stereo, binaural and multichannel. There is an expectation that a full Atmos track would be the same as the stereo in terms of delays, reverb and other parameters. This is clearly nonsense as there is a world of difference in how it sounds as well as not accounting for the artistic changes that can be incorporated. Also, loudness has become chaotic with a misunderstanding that immersive does not need to have the dynamics crushed as has become the norm in stereo. Consequently, some Atmos tracks were very loud and not authentic to the music. “It doesn’t make sense to reference to stereo which is the format of yesterday. In the future our children and grandchildren might only listen to a multi-speaker system and will be disappointed if the results have been compromised by too much compression or unadventurous mixing.” 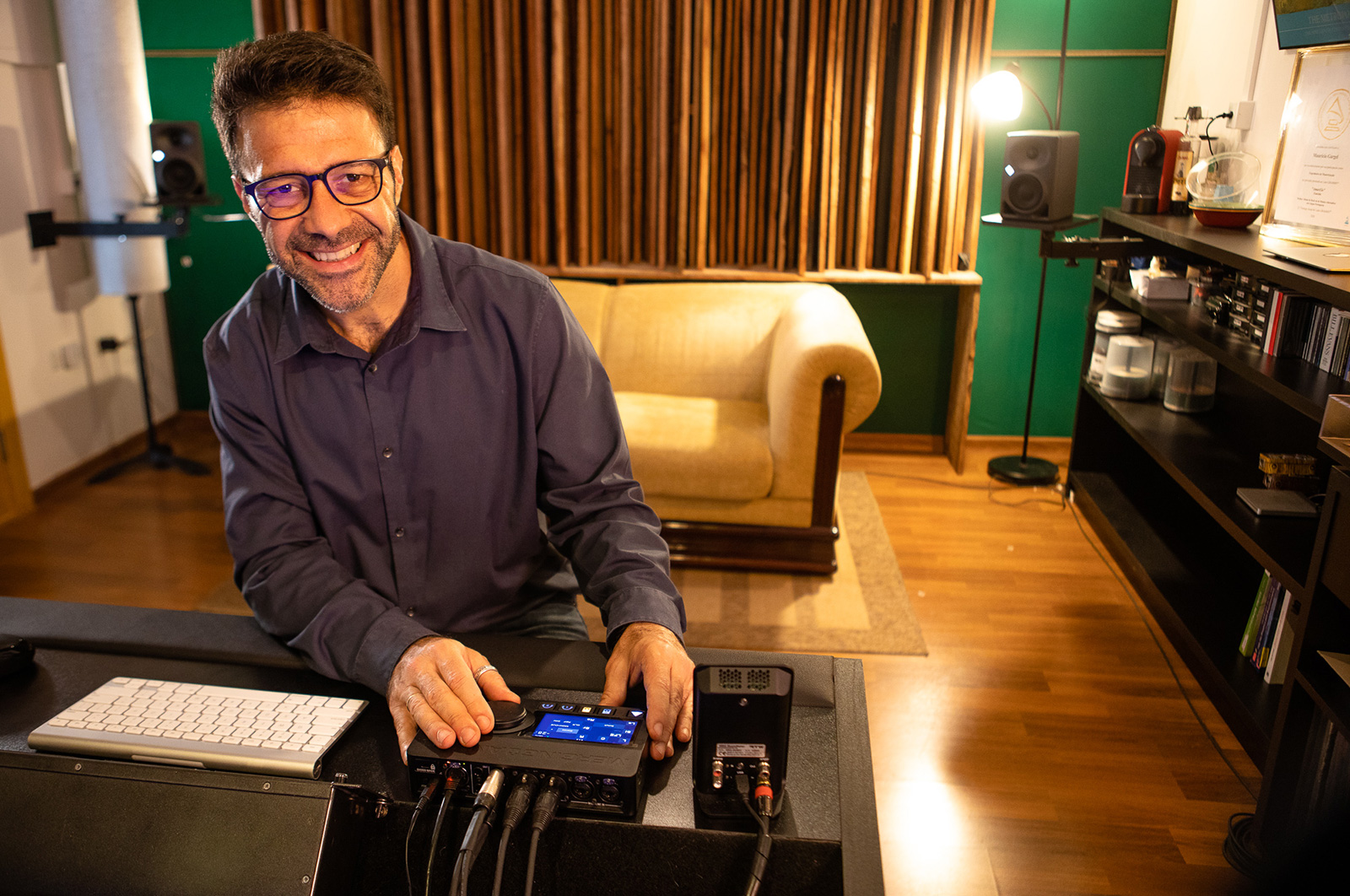