In responding to the continual squeeze on programme budgets, Sound Supervisor Julian Gough has drawn upon his 28 years in broadcast television sound to develop a cost-effective recording solution that can be transported in a family car and used in a confined location. The answer he arrived at is Iris Networked Post System, comprising of the Pyramix DAW and Horus ADDA Converter and Mic-Pre from Merging Technologies and one of the first assignments was for the BBC on board HMS Illustrious.

In responding to the continual squeeze on programme budgets, Sound Supervisor Julian Gough has drawn upon his 28 years in broadcast television sound to develop a cost-effective recording solution that can be transported in a family car and used in a confined location. The answer he arrived at is Iris from Merging Technologies.

Recent developments in very portable cameras that record HD video have allowed the choice of locations to become increasingly adventurous. In many cases, it is simply not possible to get a multi-camera OB truck close enough to record the event. Studios “in a box” have evolved to cater for those requirements and the reductions in equipment, manpower and rigging time have all benefited programme budgets. But complex audio solutions are often a requirement as well, but here there was not much choice until Julian rose to the challenge. Having recently left the BBC to start his own venture, Noises Off, Julian realised that here was an opportunity.

With conventional sound console technology the size to facility ratio is improving all the time, but the situation remains, once a project is too big for the available console, the options to expand are limited without the proportional expansion in cost. Julian was looking for a more scalable solution that could work within a limited budget. He started investigating the processing power available in the modern Digital Audio Workstation (DAW). He was used to using Pyramix which did definitely have the capability, but how could he turn it into a workable live mixing system? A visit to the eMerging stand at BVE in 2012 provided the potential answers when one item on display was the Tango 2 from Smart AV which, despite having only 8 faders, was able to access many more channels with relative ease. There was also the potential expand in the future using the Tango 2 Expansion. If this was used to control the powerful mixer within Pyramix, this might work but that still left a lot to cram into the car. Another item on display caught Julian’s eye. This was the soon to be released, Horus Networked Audio Converter from Merging Technologies. With the enormous convenience of operating on the RAVENNA network, Horus units can act as stage boxes with minimal network cabling the last piece of the puzzle had been solved. The reduction in size, reduction in cable and the convenience of the in-built routing made a big difference but the real joy was that Horus also had high-quality mic amps that could be remotely controlled, so yet more boxes could be saved. If this was the solution, there was a snag; Horus was not shipping yet.

Julian had no choice but to wait, but he was kept busy in the interim during the busy London 2012 summer. By the time Noises Off was fully operational and finance was available to make the investment, Horus was not only out but was receiving rave reviews. Coincidentally, a number of other recording engineers and post production houses had found out how well this combination worked and it made a lot of sense to offer the package from one supplier. In eMerging’s case, they were already distributing both brands but by mutual agreement with Smart AV, Iris was launched at IBC 2013. Noise Toys first major assignment was a recording of the BBC’s Songs of Praise from Liverpool Cathedral. Despite being confined to a corridor in the crypt, everything worked out well. The benefits of a small scale modular solution providing I/O, DSP processing, console and multi track recorder from a single source really became apparent.

A few months later the location was even more extreme. The One Show is a live programme presented daily during the week by the BBC and it features a mix of studio and location material. For this edition, the decision had been made to do the entire programme from the deck of HMS Illustrious, currently the British Navy’s only active aircraft carrier and moored at the time in the middle of the river Thames at Greenwich near London. Those familiar with the show will know that guest are interviewed on a large green sofa and this was duly placed on the flightdeck. An OB truck was parked on the river bank but facilities were needed on board the vessel so One Box Television were recruited to provide the camera subcut and NoiseToys the audio facilities. That meant that along with the green sofa, large numbers of forces personnel and a scattering of Royal family members, a camouflaged army tent was erected on deck to house the audio equipment. Presenters were interviewing war veterans and media personalities and the assembled company was treated to a fly past of six Royal Air force aircraft. In addition to the usual pressure of making sure that everything was covered as it happened, the whole event had to be rigged in the morning and removed immediately after the show finished. Here the compactness and simplicity of the Iris system was a real bonus. In pressured situations like this, complex rigs can become extremely stressful and difficult to achieve in the time allowed. The near vertical stairs in the Royal Navy vessel did prove to be something of a challenge. Fortunately, one thing that the British military know how to do well and that is moving stuff! A quick word with one of the liaison officers and a squad of junior seamen appeared; ready to move equipment to wherever it was needed. Despite the complexity of the shoot itself, everything could be managed with relative ease.

The aim of NoiseToys, says Julian, was to provide a flexible recording and live mix facility, which has potential of scale, yet is cost effective for those on a tight budget and still retains the quality. The facility is constantly evolving to take into account of market requirements, but the Iris core with Horus networking remains the same. 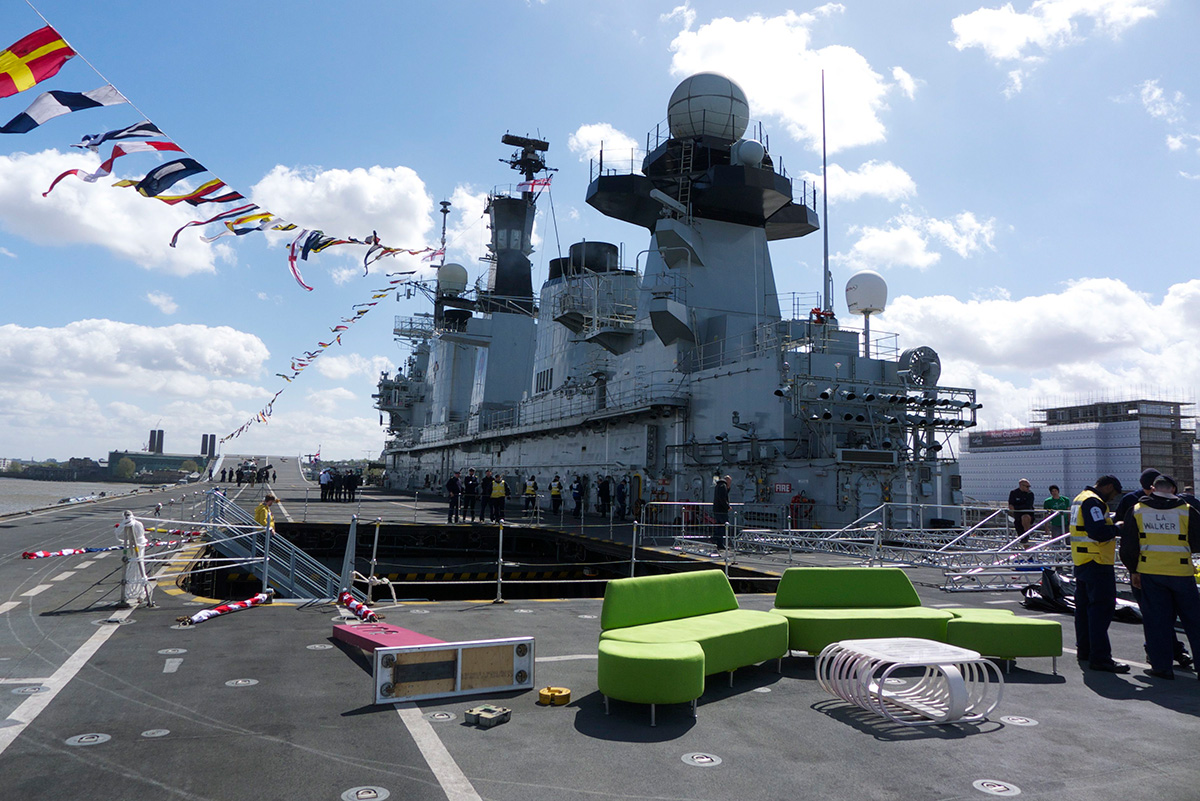 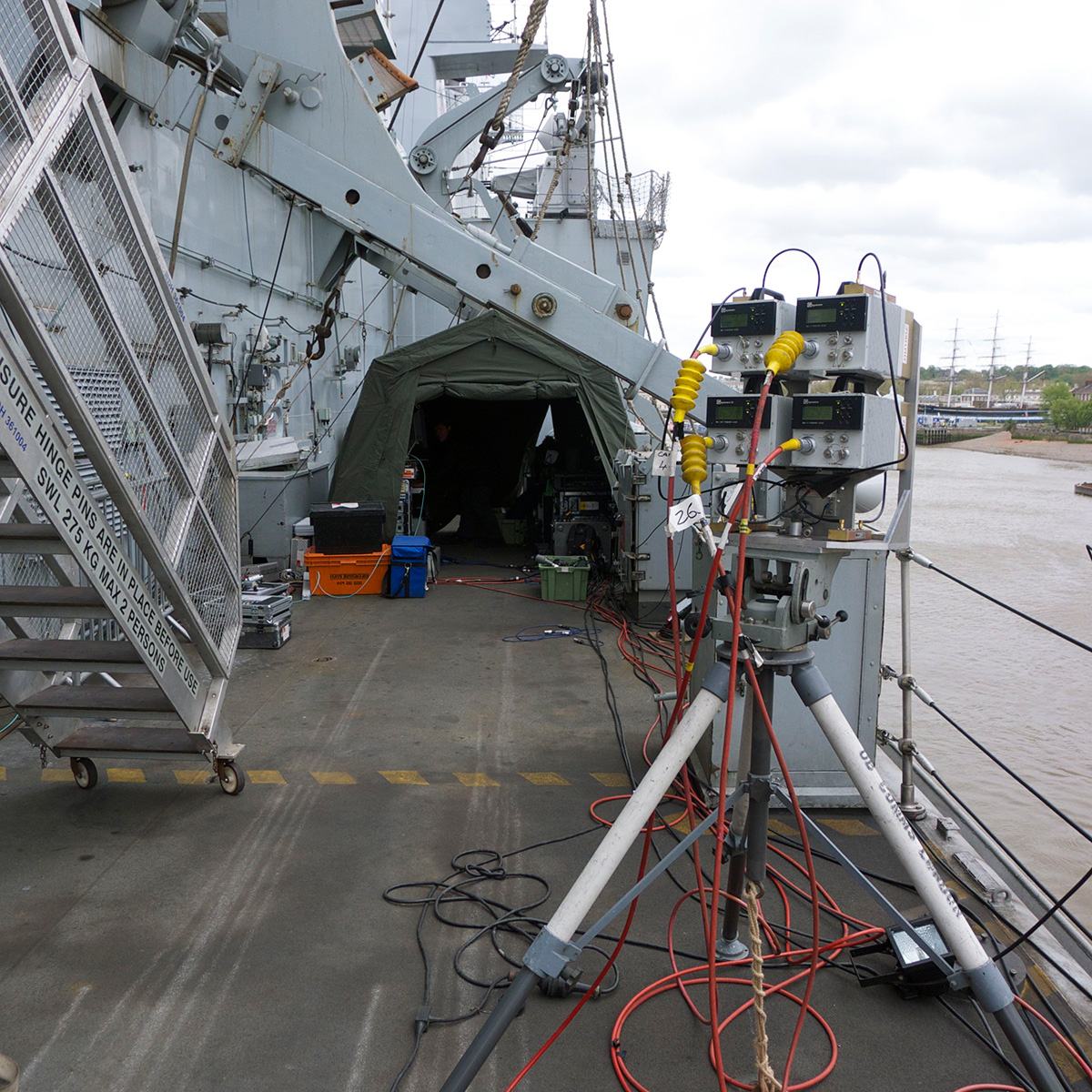 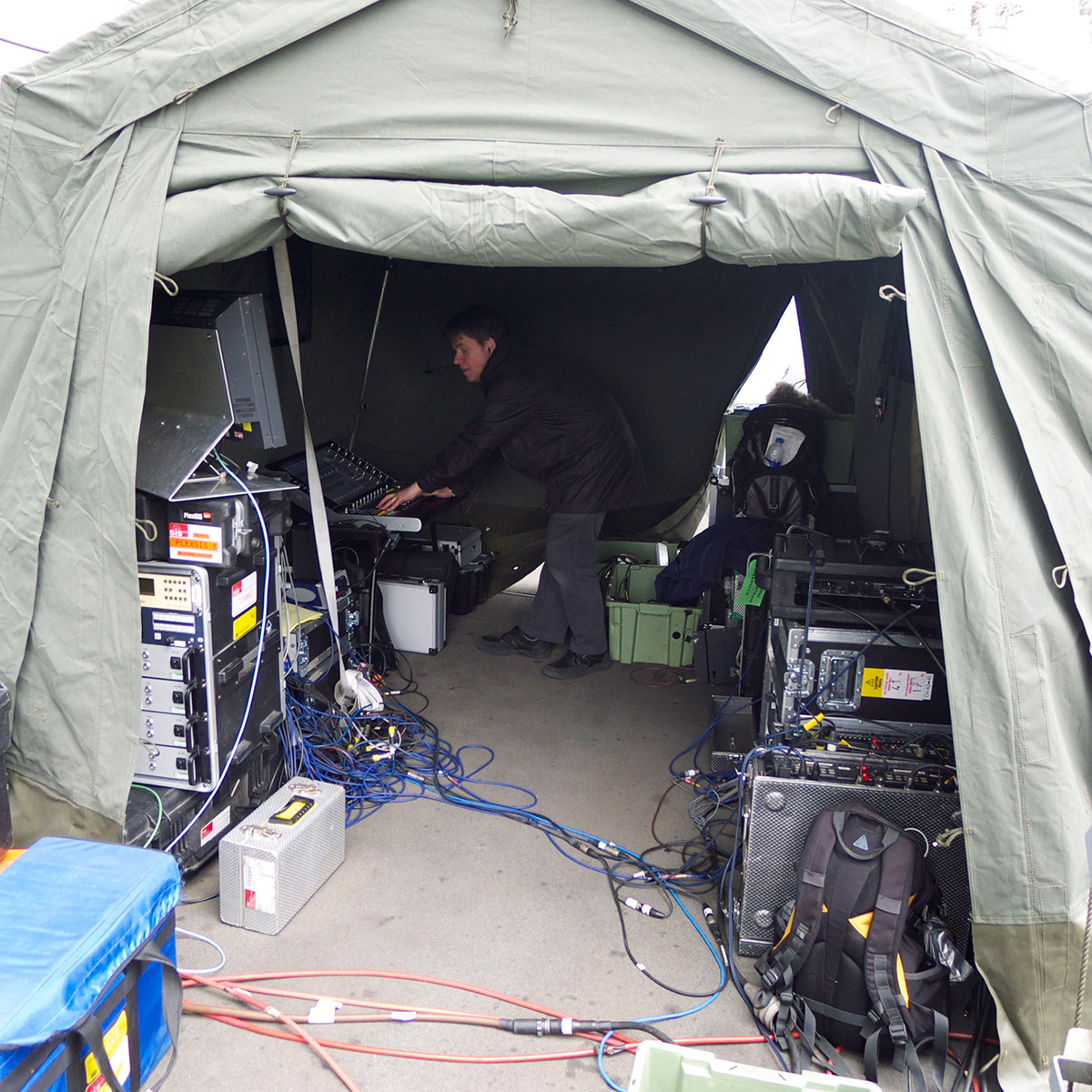 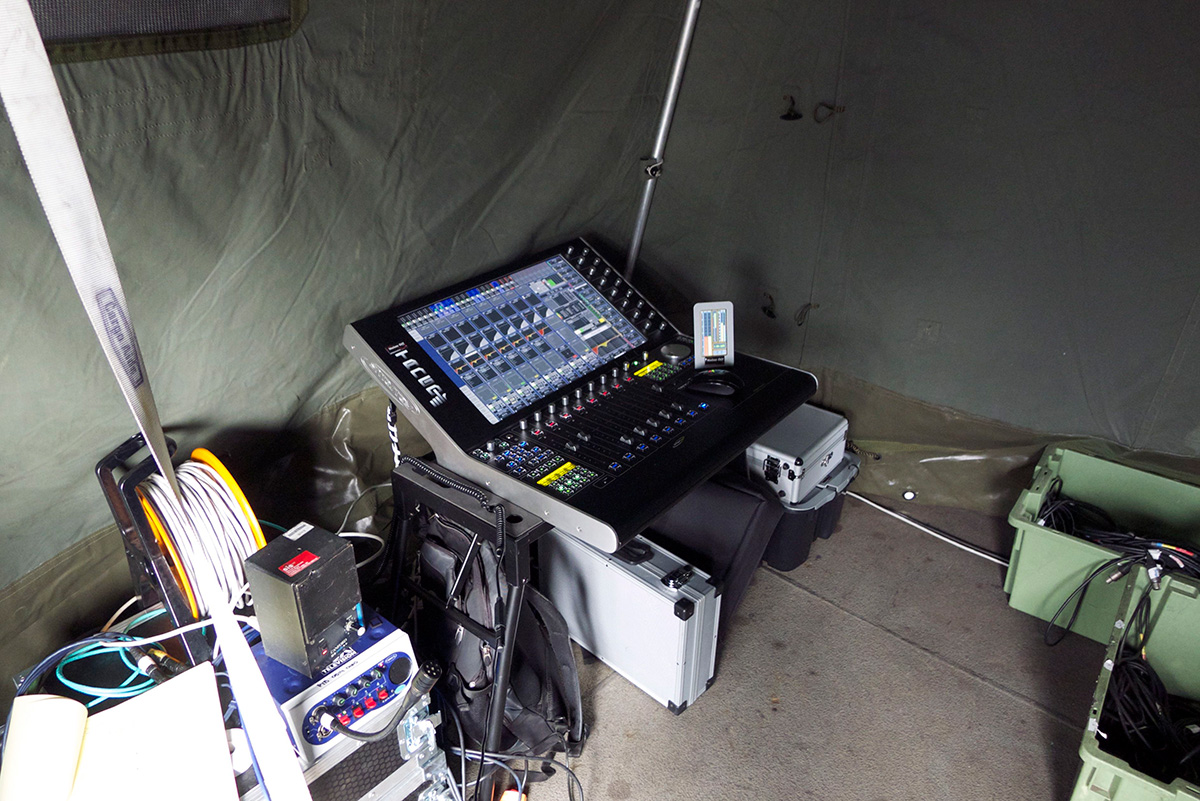 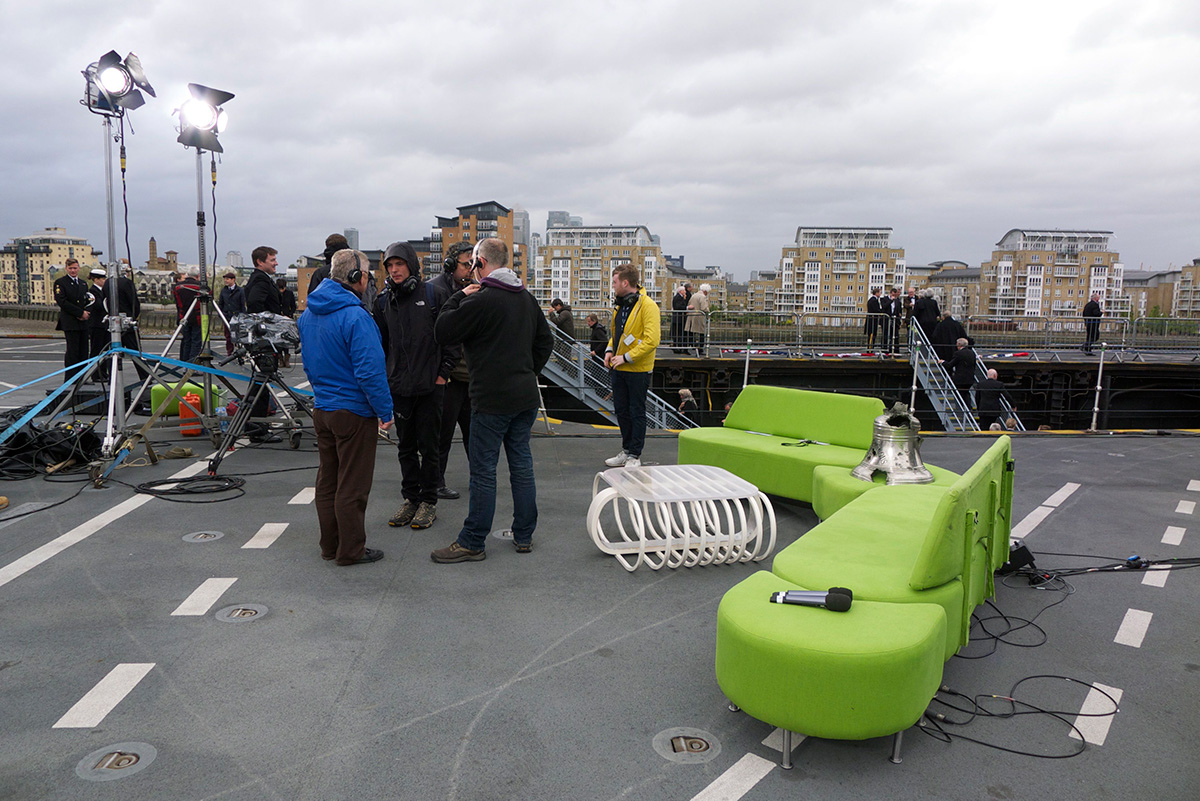