Ever been to a drive-in opera? Probably not as this is a rather unusual proposition but one that has just completed a run of evening performances that started on April 23 and finished on May 15 2021. Rossini’s “The Barber of Seville” used a custom-built stage more often deployed for the “Coachella” festival, which was erected along with two IMAG screens in the Marin Center in San Rafael. This area accommodated 200 cars that could view the live stage. The “cheap seats” were the other side of the lagoon where another 200 cars could view the live transmission on a big LED wall. Rehearsals for this bold endeavor started when the temperature in the evenings was hardly Californian at less than 5 degrees centigrade. Fortunately, things had warmed up considerably by the time the run began, leaving wind as the only weather hazard to cause issues with the radio mics. In this scenario, getting the live sound right is obviously paramount and there were two Digico consoles and one Midas console used; one front of house, one in the orchestra pit and one on stage. Four Horus units were used, one handling the RF mics, one in the orchestra pit for the twenty musicians, one on stage for the monitor mix and one front of house. In some cases, these were primarily being used as I/O converters going from MADI or AES/EBU to RAVENNA or vice versa. The ability to have a simple network connecting all these boxes made the rigging much easier and less expensive and was building on years of experience in using RAVENNA in the opera house. 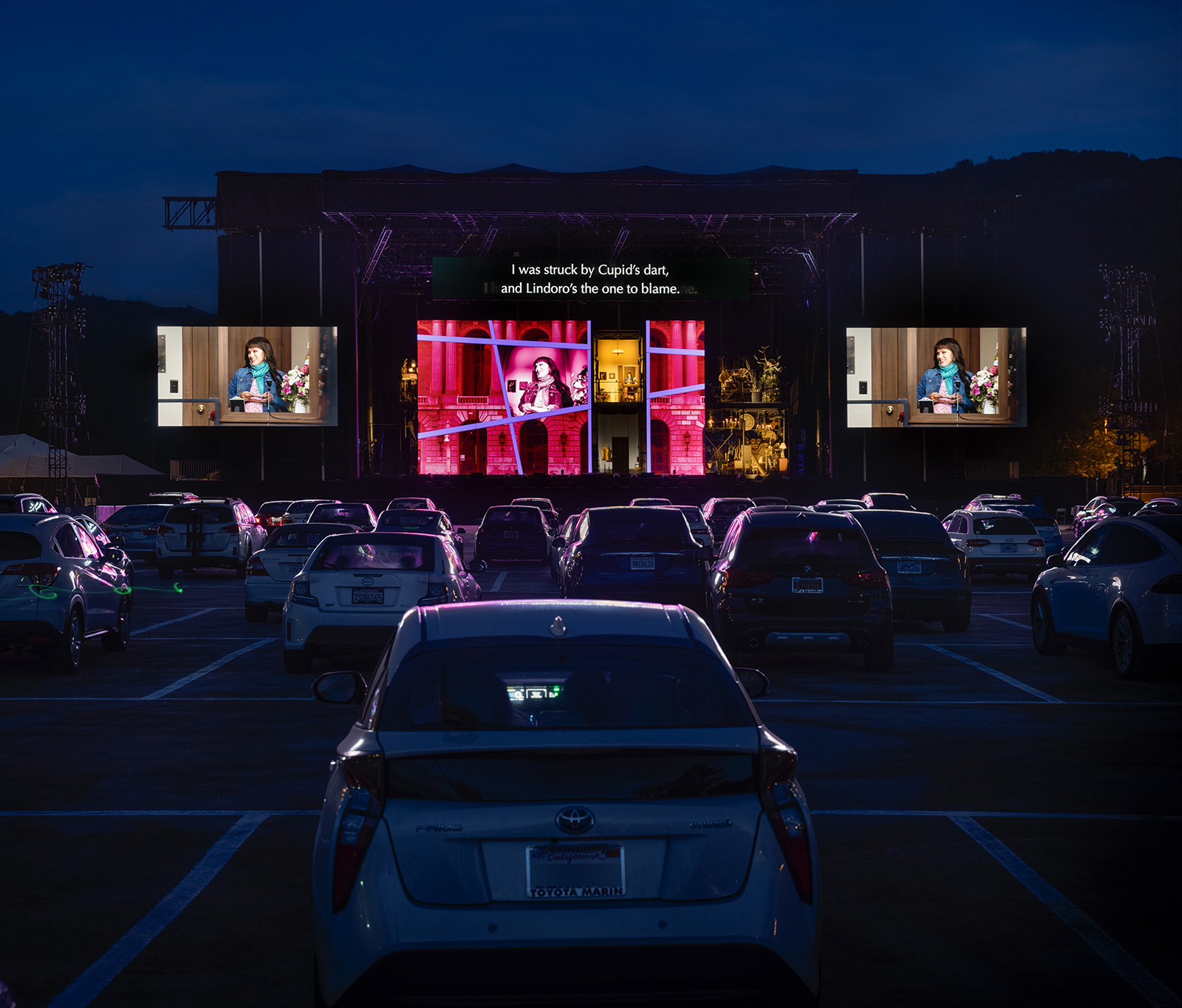 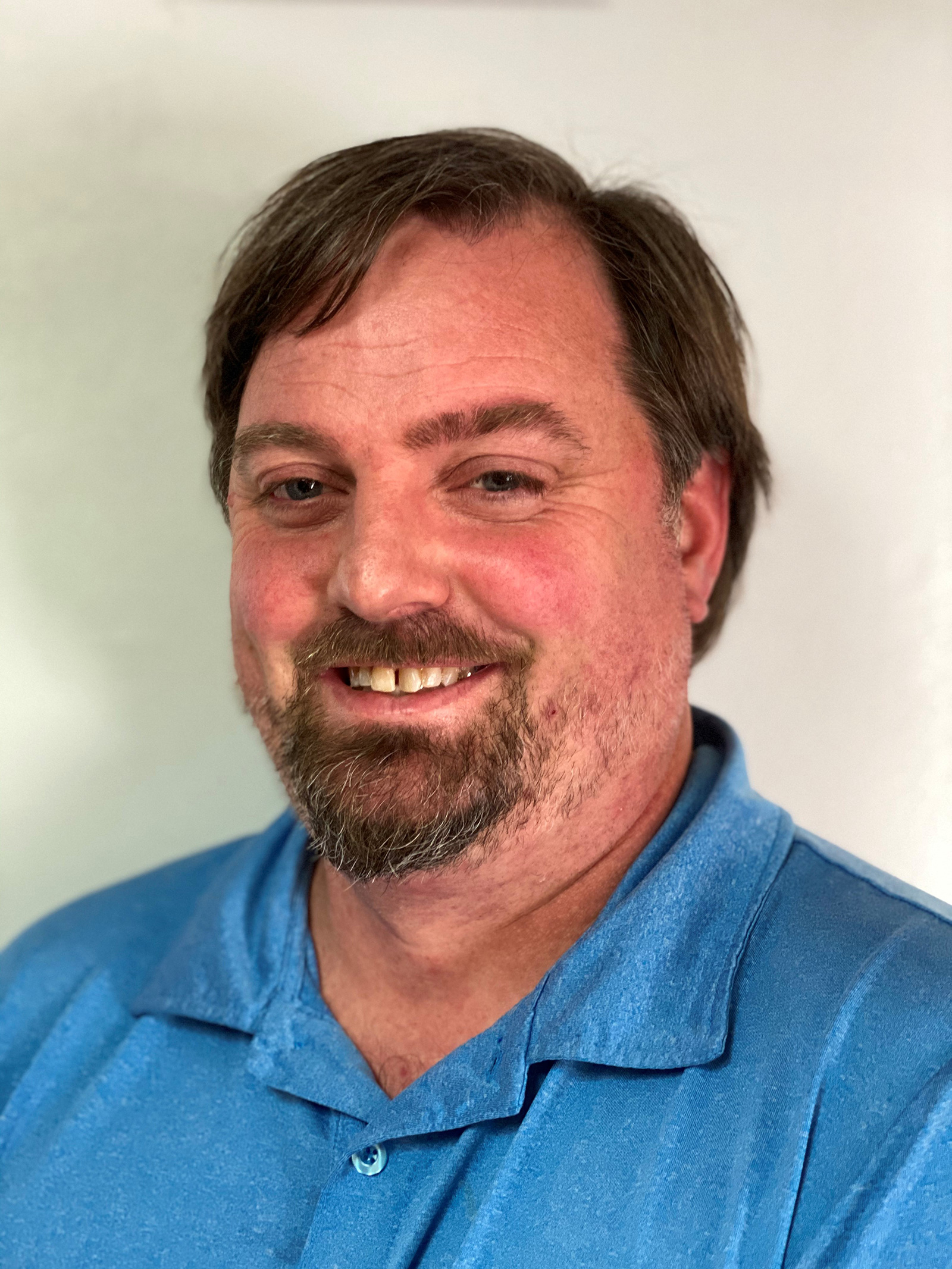 The responsibility for the technical success of the drive-in fell to Doug Mitchell who has been with the San Francisco Opera since 2001 and has overseen the increase in audio and video capability within the complex. Initially just doing simple archive recordings of the performances, in 2006 there was a need to do multitrack recordings for radio and in 2007, a broadcast video suite was installed. Pyramix was already central to the audio recording and editing but using the earlier Mykerinos cards. This was rapidly changed to Horus and RAVENNA once the advantages of the networked approach became obvious. The console is on the 5th floor of the building meaning the cable run is 3-400 feet long and running analog cables of this length is lossy and involves a lot of copper. A single Cat cable replaces all of those analog lines and removes the signal degradation. Being able to get the mic pres close to the relevant microphones further improved the situation and now there are two Horus units in the pit handling 64 mic inputs, there is another handling the 32 RF mics, one in the audio edit suite, plus a Hapi in the ceiling for the suspended mics. The facility has been switching to Lawo consoles over recent years with the latest MC56 MKII scheduled to replace the old Euphonix System 5 and another MC36 MKII replacing another Digico console. This further reinforces the operational advantages of RAVENNA throughout the main rooms in the complex. 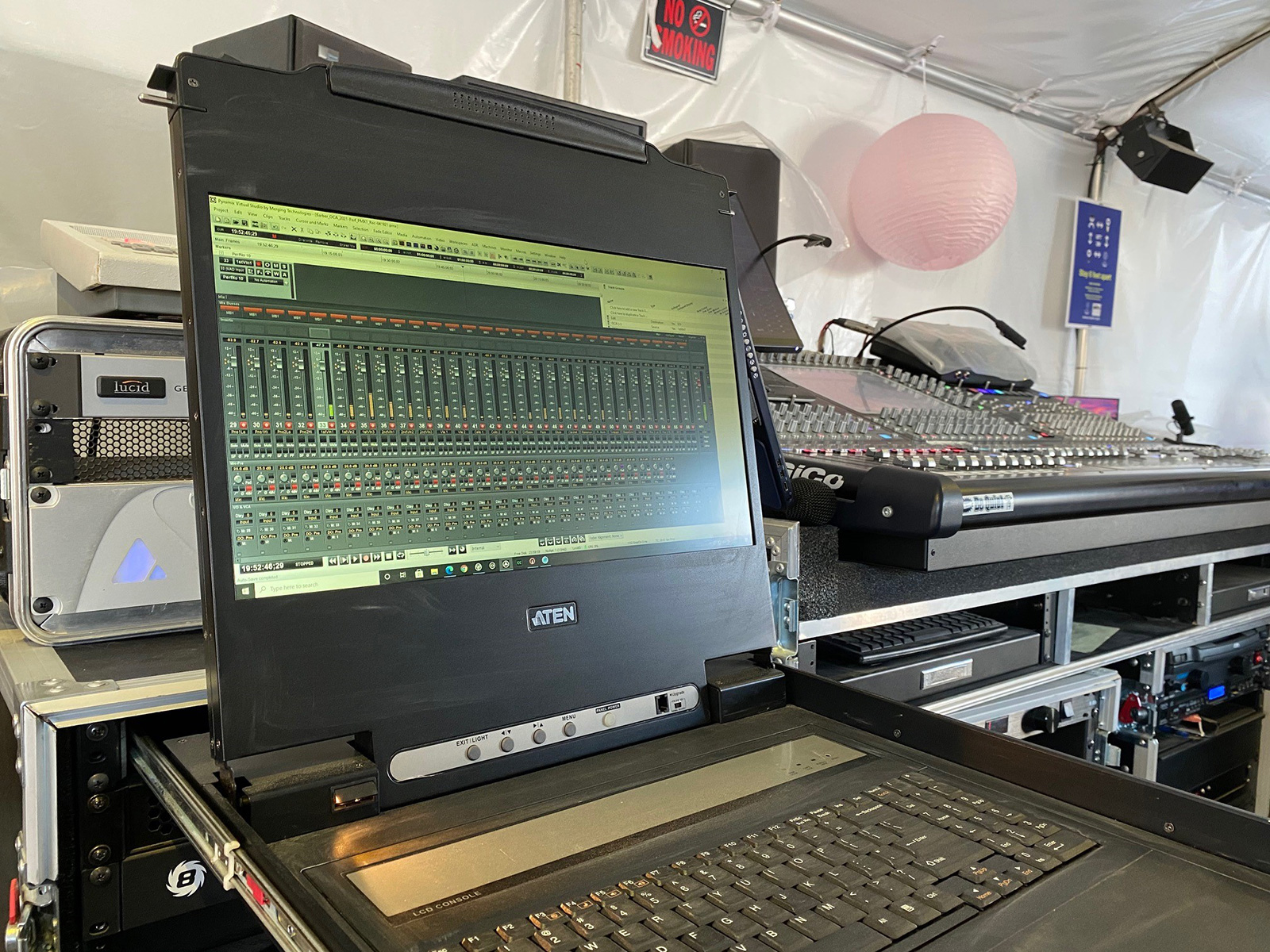 The pandemic had the obvious consequence of suspending live audience participation in the main auditorium, but there are other activities that needed to be maintained and the Adler Fellowship Program, the company’s Young Artists’ Residency Program is vital to nurture the up-and-coming talent who will be the stars of the future. The difficulty was how to do this and preserve social distancing whilst still allowing interaction with other students. Putting conventional audio equipment in the nine practice rooms (Five setup for singers and four for pianists) would not achieve anything other than solitary confinement! Again, the solution was easy if you install another RAVENNA device and here MERGING+ANUBIS was the cost-effective and ideally compact solution that would allow them to rehearse by themselves or pick up the audio from other rooms and most importantly, the piano. In addition, they can communicate easily with each other and there is a small auditorium, the Black Box Theater, in an adjacent building used for rehearsals and student performances that has another 32 channels of mic pres running via a fiber cable into the main building. 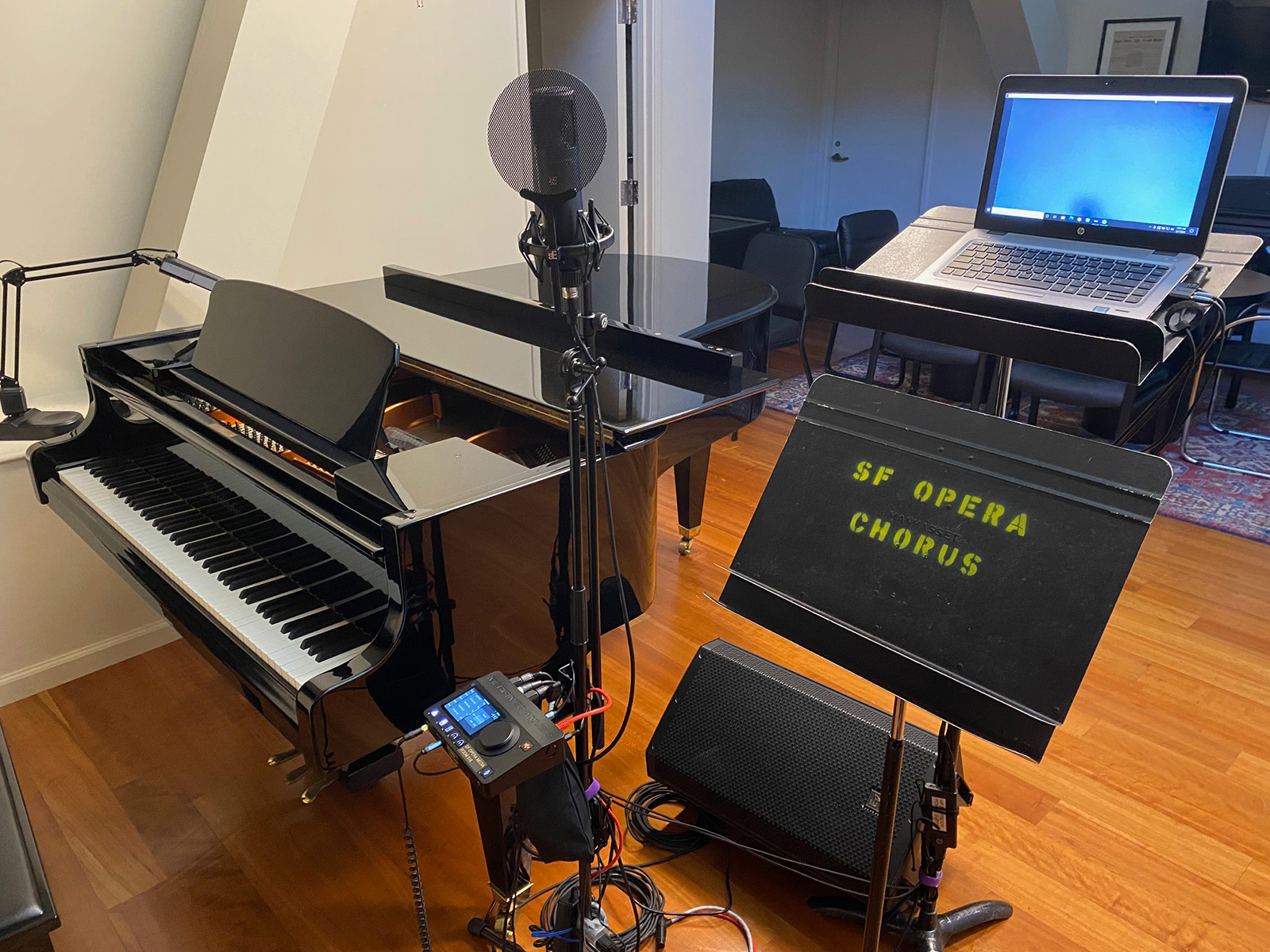 The opera house is located just across the street from the San Francisco Symphony Orchestra’s home, the Louise M. Davies Symphony Hall and here we will find another building similarly equipped with an impressive array of Merging equipment. So, is there any opportunity for joint projects? Doug Mitchell takes up the story; “We are all friends and neighbors in this community but unfortunately there is no easy way to communicate technically without digging up the street and installing dark fiber for a ridiculous cost. I have been helping them out with setting up their Lawo console and we can exchange gear like Merging I/O if extra is needed on either side. However, we have learned a lot this past year about live streaming so who knows what could be possible in the future. For sure, even if we return to relative normality, there will be some things that will stick with us that originated from the lockdown situation.” Indeed, there is a hopeful plan to resume a season with a live audience commencing late summer; the audience might be reduced and the program slightly less ambitious than normal but much of this will be influenced by government and health advisory policy a few months down the line. 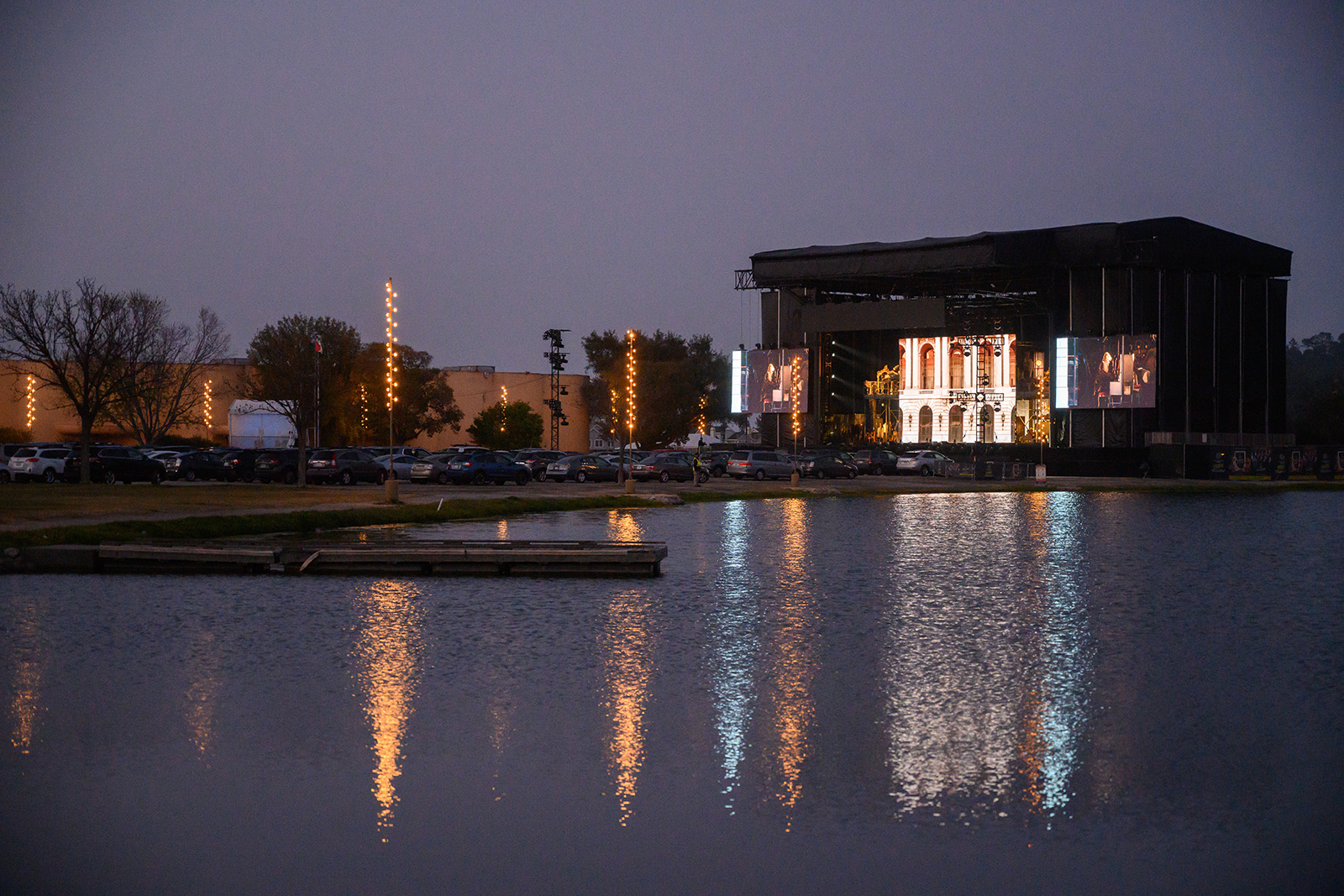 Nobody can deny that the events of 2020 and going in to 2021 have been devastating for much of the performing community. The fact that the opera house never closed kept Doug Mitchell extremely busy and he reflected on the past months. “I realize that I have been lucky to have kept working and that we have been able to continue to upgrade our facilities while it has been quieter. The drive-in has been a lot of work, a lot of fun and very successful but it is a rather costly way to present opera on a regular basis. We have been doing live broadcasts to the baseball stadium for several years, which seats way more than we can and allows for a free event to reach people who might not have the chance to come to our building. That is obviously much easier and cheaper to do. One thing I can say is that over this last period, whether inside or outside, RAVENNA has been a life-saver and even after so many years, using Pyramix with our Horus units continues to give great service and Anubis has proven to be a revelation. We couldn’t imagine using anything else.” 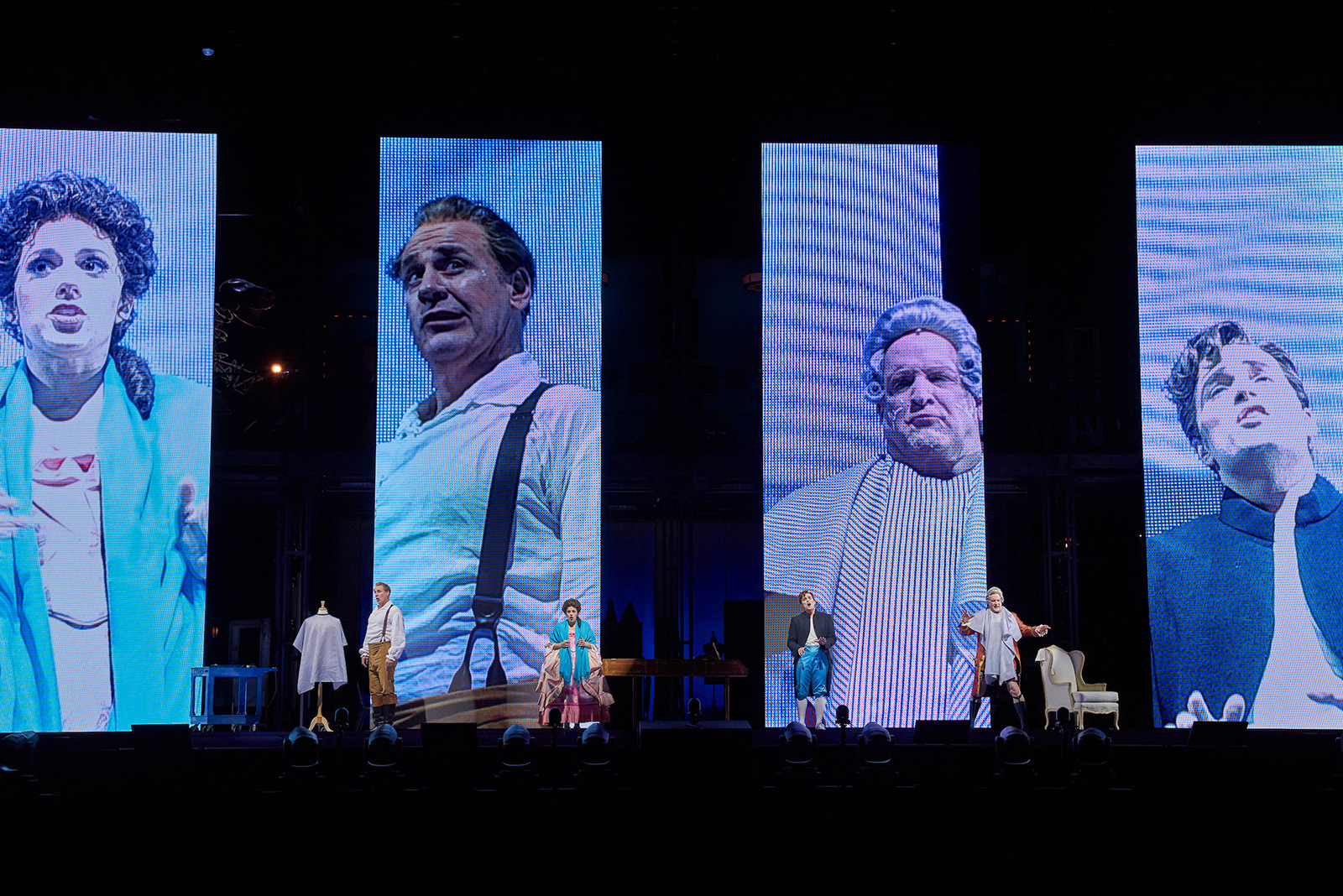