Located in beautiful Portland, Maine, Grammy and Latin Grammy winning mastering engineer, Bob Ludwig, built Gateway Mastering Studios in 1992 with the intention of having the very best gear, monitoring and room acoustics possible.
The studio has been a busy place from the day it opened putting Portland on the map of world famous audio facilities. This past April, Rolling Stone Magazine’s “Best of Rock” article declared Bob “Best Ears”. Allmusic.com currently displays over 45 pages of credits for Bob. 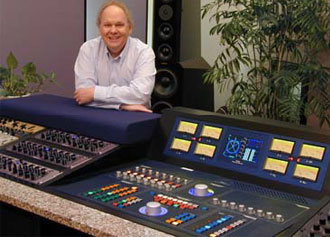 He is surely one of the hardest working people in the music industry mastering such greats as Coldplay, Radiohead, Bruce Springsteen, The Rolling Stones and many more. Bob was looking for the best workstation six years ago and he and his staff did a thorough investigation of all the best workstations available and decided to try Merging’s Pyramix. As the studio’s schedule can not tolerate any downtime, he had his protégé Adam Ayan and Tech/DVD specialist Brian Lee learn it first to be sure we were making the right choice. Their reactions were very positive: we could edit and re-sequence albums in less than half the time it used to take us with our previous work station.
Bob says “the Mastering workflow demands Source–Destination editing and the Pyramix not only offers that but it is so flexible one can set it up to work like almost any existing workstation.” The Pyramix sounded transparent and it was very powerful. Bob switched over and has never looked back.

"Gateway Mastering Studios has 5 MassCore systems all networked together which makes session prep, the session itself, editing, de-clicking, de-noising, file conversion, downloads, DDP and CD prep a breeze. I’m happy to say that since we have switched to Pyramix we have seldom needed much technical support, but for the times we have needed it, Merging and Independent Audio, their US distributor, have always been there for us in a knowledgeable, helpful and timely manner.
We know that Merging Technologies is not sitting still but are advancing the state-of-the-art technology with DSD and DXD recording capabilities with the highest track counts of any manufacturer. I don’t think we will ever outgrow our Pyramix."