Puidoux: April 2020 - The global response to COVID-19 varies from country to country but it seems to be universal that large public gatherings are not permitted. This affects musicians very seriously but it also has implications when it comes to a national celebration. Social media has been awash with inspirational videos of Italians singing from balconies and virtual gigs from musicians and singers who just want to perform. In Denmark there is a popular tradition of “FÆLLESSANG” which can be literally translated as “common-singing”, that is as popular now as ever before. The question is how to celebrate your Queen’s important birthday when public gatherings cannot take place and all of the celebrations are cancelled. The challenge of leading the nation in song was picked up by the Copenhagen Philharmonic Orchestra who wanted to capture more than 100 musicians and singers on video to lead hundreds of thousands in singing Happy 80th Birthday to Queen Margarethe.

The audio production for this venture was assigned to Daniel Davidsen whilst there were three people involved with gathering the video content. This proved to be not only innovative but complex and very time consuming. It involved working flat out from April 2nd to the morning of April 16th which was the actual birthday. The final mix was completed at 7.00am, the video was completed at 10.00 and the production was aired at midday. Not content with just singing the traditional Danish Happy Birthday song, three other pieces were added to the program:

The Sun is so Red, Mother. Harald Bergstedt (1915)/Carl Nielsen (1923-24).
This is a “dark” lullaby: The sun is so red, Mother/And the woods will get so black/Now the sun is dead, Mother/And the Day has gone away/The fox is out there, Mother/Now we’re Locking our Hall/Come sit by my pillow, Mother/and sing a little song. 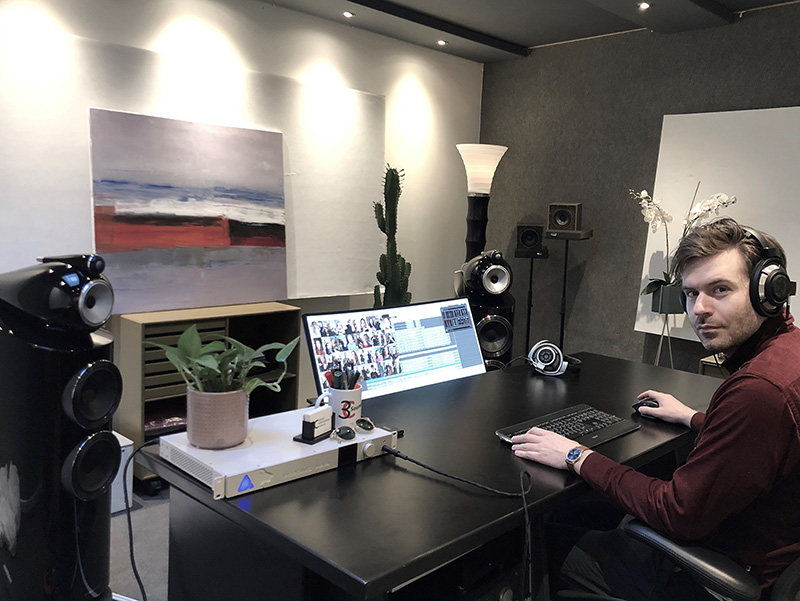 Daniel Davidsen explained what went on behind the scenes to create this production. Initially, the Orchestra created a midi file with click tracks and a tuning tone to give the earphone feed to each musician. Each day, new files would come in from the musicians playing at home and these new tracks would be added to the master listening file. This is where some problems were quick to be realized and Daniel takes up the story; “However, it soon emerged that click tracks were unable to replace a conductor, and both rhythmic and dynamic adjustments were used as tools to obtain a more “natural” orchestral sound. Each musician produced 3 full takes that I often edited together. It also emerged that listening to a tuning tone was unable to replace the need to listen to each other and it was often necessary to change pitches. After completing the orchestra part, the singers delivered their files; only a few of the singers were professional. As the editing was completed I imported the video in Pyramix and balanced the sound to fit what happened in the video. I also worked to produce a stereo image and to simulate the reverb of a concert hall and to try to compensate for the rather variable audio quality from the use of cellphones.”

Davidsen has been a Merging customer since his time at the Royal Danish Academy of Music in 2015. He has recorded all of Beethoven’s symphonies in a production that is the IMCA Award Winner 2020 in the Symphonic Music category. In his home studio he has a Hapi and a RoadRack 3U (he has made this noiseless) with a MassCore system and Pyramix 11. The loudspeakers are B&W 803 D3. The soloist Thomas Buttenschön and some of the singers were recorded with the Hapi and a laptop with Pyramix Native. All other musicians and singers performed alone in their home. The singers were also in their home, together with family members. In Denmark they try to maintain 1-2 meters distance and the maximum group size is 10.